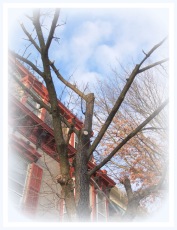 An article in today’s Schenectady Gazette discusses the issues raised by National Grid’s aggressive trimming of trees in the Stockade and Union Triangle neighborhoods the past two weeks. See “Residents upset after trees trimmed,” by Kathleen Moore, B3, January 18, 2013, online by subscription).  This is, of course, not a new issue, and Stockade residents have complained about the ugly over-amputation of tree limbs and topping of trees, and the resulting loss of shade and beauty, for many years.  The “trimming” is done, of course, in an attempt to prevent power outages and other damage from falling limbs.

In the Gazette piece, National Grid forester Michael Freed is quoted saying he could not cut back trees any less, and that they often trim less than the company’s guidelines, which are to cut back 10 feet away from the primary wire and 18 inches from secondary wires.  They often leave behind lopsided trees, and National Grid spokesman Patrick Stella suggests that homeowners could request that their trees be “rounded out” after safety cuts are made.  Gillespie St. resident Jackie Craven complained about the over-cutting of flowering pear trees on her street.  ReTree Schenectady, which planted those trees, now attempts to put shorter trees under power lines.

Earlier this week, I wrote to the Stockade neighborhood Yahoo email list, complaining about the over-trimming that occurred again last week, when a Lewis Tree Service crew came through the Stockade on behalf of National Grid.  As an example, I gave the treatment of a healthy tree in front of 101 Front St., behind the statue of Lawrence the Indian; see the image at the head of this posting.  The following collage was attached to my email message, comparing that tree on the day when Lawrence was removed for cleaning last May with its current sad state (L):

The damage from the amputations will be even more apparent when the leaves return this Spring.  Imagine, for example, the view behind Lawrence with all the leaves above his biceps gone.

I understand that trimming is required for safety reasons, but our trees are too valuable to be treated with so little care.  The City of Schenectady needs to let National Grid know that the company must be far more discerning when trimming our trees.  Unfortunately, the City does not seem to appreciate the importance of trees to our cityscape and ecology.  You may recall, for instance, that this weblog — which was originally named “Preserve Our Stockade Trees” — was created in April 2010 to fight the City’s plan to cut down all the mature trees on Washington Avenue when it repaved the road and replaced sidewalks.  See our first posting.  When we protested that foolish plan, the City purportedly decided to punish the Stockade by not repaving. [follow-up (May 19, 2014): more than four years later, there has been no repaving.]

One possible solution to this problem is contained in a bill proposed again this year in the New York Assembly by District 92 Assemblyman, Thomas J. Abinanti. Assembly Bill A02300 would add an Article 3 to the NYS Public Service Code in order to regulate the cutting, topping and removal of trees upon rights of way by providers of electric service, setting up a commission that would make and enforce regulations meant to assure that tree maintenance is done in a manner that has a less destructive impact on our trees.

In addition to requiring that a State arborist certify the need for trimming or removal of a tree, and requiring notice to a municipality and homeowners, the Bill states that:

Mr. Abinanti needs co-sponsors and public support to move his Bill through the Assembly.  Please let your Assemblyman know that you support the goals and requirements of Bill A02300.  You can reach 110th Assembly District representative Phil Steck, by clicking here.

– use the short URL http://tinyurl.com/OverTrim to share this posting.