S.O.S.Trees (Save Our Schenectady Trees) was launched in late April 2016, during the week of Arbor Day Celebrations. It is a campaign to achieve a Tree Preservation Policy for the City of Schenectady, especially for its older, larger street trees along the curb in the public right of way. Below you will find information that we hope will motivate you to want to join the cause. . . Share this page with the short URL: http://tinyurl.com/SOStrees . You can contact us at SOSTrees@nycap.rr.com

The initial meeting of SOS Trees was held on Saturday, April 30, 2016. Click for the Meeting Announcement. A summary of that meeting, with a handful of photos, and printable versions of much of the materials used at the meeting, can be found in the posting “the day after Arbor Day”.

follow-up (March 12, 2019): Passage of the City’s new Sidewalk Assessment District resolution, which promotes fixing sidewalks with City-owner involvement a block at a time, again raises concerns of losing many street shade trees under the City Engineer’s root-cutting criteria, as happened in 2008 on No. Ferry Street. (See Times Union article, March 12, 2019).

A SUMMARY of Our MISSION, with Useful Links:

It has once again become urgent that we work to create a Tree Preservation Policy for Schenectady, so that trees in the City’s right of way (between the curb and sidewalk, and in medians) are preserved, unless an individual tree is dead, dying or dangerous. That means that alternatives to tree removal must be employed, except where there is no viable alternative.

The urgency exists, because the office of the City Engineer has again stated that the City will use the 2008 process employed on No. Ferry Street in the Schenectady Stockade (where it took down every mature tree along the curb), as its template for providing improved sidewalks and the re-paving of residential City streets.  If the City Engineer uses the same criteria applied on Front Street in 2008 and also proposed on Washington Ave. in 2010, every large street tree is at risk of being removed, because it is deemed to pose too great of a liability potential for the City, if its roots are damaged during the repaving or repairs.  [Click on the collage image to the left for a larger version, with Before and After photos of The Great North Ferry Street Deforestation of 2008.]

The issue arose again publicly for many of us in 2010, when the City threatened to take down all mature trees along Washington Avenue when repaving it and replacing its sidewalks. A combination of resident opposition and strong Schenectady Gazette editorials (see here and here) prevented this unwarranted attack on a valuable portion of our urban forest, and the beauty and history it embodies. After that first crisis, the repaving of Washington Avenue was delayed four years, and sidewalk repair was indefinitely postponed.

This website was, in fact, created in a rush in June 2010, in response to the threat to the trees on Washington Avenue, under the name Save Our Stockade Trees.  Although the site is now focused more broadly on Schenectady issues and called “Snowmen at the Gates”, the tree-preservation materials are still available, with the “Save Our Trees” tab on the masthead leading to this webpage, which serves as a portal into the topic. We hope public outcry, combined with serious research, consideration, consensus-building and proposals to solve the problem, will again be able to Save Our Schenectady Trees, and guarantee their future preservation.

What is it worth in dollars, environmental, social, and economic benefits, civic pride, and aesthetic pleasure for residents, visitors, and tourists, to save our street trees?  Shouldn’t we take the time to seriously consider the options available to us other than virtual clear-cutting, before needlessly taking down a tree that is not dead, dying, or dangerous, in the name of “streetscape improvement” or liability avoidance?

. . below are just some of the street trees we need to protect; find more here: photo collages . 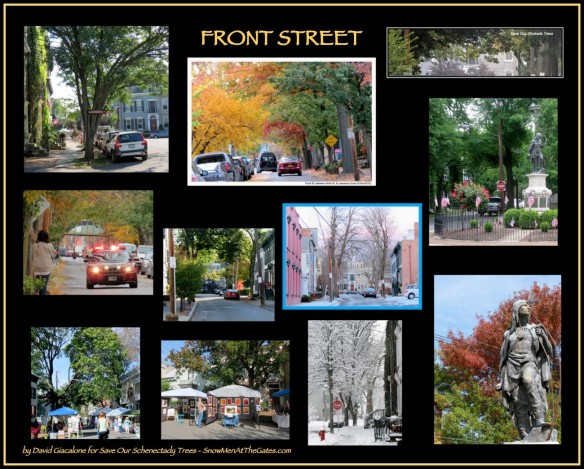 Please Note: I’ve started with Stockade photos and streets, because my photography has always focused on that neighborhood, where I have lived since moving to Schenectady in 1988. (see my photo-blog “suns along the Mohawk“) Our goal, of course, is to preserve our Legacy of Trees throughout Schenectady’s neighborhoods, and to win support in our entire community. I hope to present “what we have to lose” collages at this site from many other neighborhoods. If you would like to help create a Street View Treescape Collection, please contact me directly or by leaving a comment.

If you would like to actively work on this project to preserve our Schenectady trees, please contact the Mayor and the City Council members, send letters to your newspapers and other  media sources, and ask your friends to do the same. Here are email addresses for the Council, Mayor, and City Engineer:

WANT TO DO MORE?: If you would like to take an active part in this Tree Preservation project, please contact David Giacalone directly, or email SOSTrees@nycap.rr.com. Thank you.