The only “justification” that Galesi Group COO Dave Buicko and Rush Street representatives have given for needing a monster 80′ pylon — beyond their always implicit and winning argument “because we want it” — is that the STS Steel building blocks the view of the Mohawk Harbor Rivers Casino, so that the pylon is needed to let people know Schenectady has a casino and where it is.  Despite the fact that the STS Excuse is very easy to refute, no one on the Planning Commission or in the Mayor’s Office, or among the majority of Yes-Persons on City Council, have pointed out that the assertion is simply not true, much less asked obvious follow-up questions such as:

To put it charitably, the STS Excuse is silly and the acceptance by City Hall and the Media irresponsible and embarrassing. This posting will use images, photos and words to rebut head-on the STS Steel Excuse for a monster pylon. There is no need to balance the benefits and disadvantages of the monster pylon, because the STS Steel Building is simply not in the way of viewing the casino.

For other factors causing us to oppose the Monster Pylon, see Shrink that Pylon, which looks at the safety issues and the lessons taught by the Rivers Casino pylon in Des Plaines, and our “pylon envy?” piece, which compares the proposed pylon to signage at other casinos and to the rules that every other business must obey in Schenectady. And, see “how big is 80 feet by 38 feet?” (July 12, 2015), which reveals that the proposed pylon sign is both taller and wider than Schenectady’s former Masonic Temple, at 302 State Street. 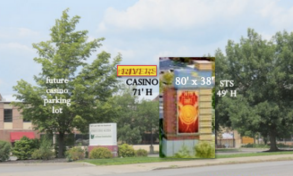 There’s No View Even Without STS Steel. Finally, and perhaps most telling, due to the terrain, the orientation of the roads, and the existing obstacles, traffic coming northward on Erie Boulevard (from State St. or I-890), or toward Erie Blvd. from Jay Street or Nott St. could not, and should not expect to, see the Casino facility until within a short block of the Mohawk Harbor entrances, even if there were no STS Steel Building.  Click on the Google satellite screenshot to the left of this paragraph, and explore the corresponding Google Map page. Thus: Even with no STS Steel Building, you could not see the Rivers Casino at Mohawk Harbor when driving north up Erie Boulevard (click on photos for larger versions):

nor from Green Street, or Jefferson or Monroe:

. . The Casino/Gaming Building is not in the line of sight up Erie Blvd. If no other structures are in the way, it will be the Galesi-Marina-Mixed-Use portion of Mohawk Harbor coming into view, not the Casino.  This shot looking south from the corner of Nott St. up Erie Blvd. shows that the street layout does not permit a view of the casino when driving north on Erie Blvd.:

Similarly, vehicles coming toward Erie Boulevard on Jay Street could not see the Casino until reaching the RR underpass at Erie Blvd.:

. . Nor could drivers and passengers in vehicles traveling “west”on Nott Street toward Erie Boulevard see the Casino building if there were no STS Steel Building, as the line of sight takes you to the future location of a Casino Parking Lot, not to the actual casino facility:

Given the reality of the Casino “viewshed”, the only reasonable conclusion of those observing the zoning amendment and site plan process to date, is that there are but two reasons giant pylons were permitted in the C-3 Waterfront zoning district: (1) The Gasino Gang wanted them, and (2) no one at City Hall had the courage to do his or her duty and speak truth to power: that the proposed pylon was “the wrong size and wrong location, and the STS Steel Building is simply not a valid excuse”.

Like the majority party members of the Schenectady City Council, and the staff at the City’s Planning and Zoning Offices, Members of the Planning Commission are apparently so accustomed to simply nodding their heads in agreement and turning off their B.S. Meters whenever Dave Buicko, Rush Street representatives, Mayor McCarthy, or his Legal Department make an assertion, they failed to notice how silly the claim is that the location of the 49′ tall STS Steel Building justifies an 80-foot pylon monster looming over the intersections of Nott and Front Streets and Erie Boulevard. Of course, given the basic intelligence of the Commissioners and the rest of the City Hall Casino Cheerleaders, it seems far more likely that they simply feel compelled to nod “yes” and to hide behind phony deadline pressures for their Rush to judgment. Perhaps the firm MakeBobble.com (see sample of card player bobblehead at the left of this paragraph), could customize their dolls a bit further for us so that the heads only nod up and down and never shake a “no” reply. When reviewing the proposed amendments to the C-3 Zoning ordinance in early January, we wrote in “the House is already winning” that:

“By merely suggesting the possibility of an 80-foot pylon, Rush Street and Galesi Group demonstrate a brutish lack of sensitivity to aesthetics, safety, neighborhood traditions, and the image and reputation of the City of Schenectady — not to  mention the truth.”

Those strong words have not loss their significance, but it is tempting to be more antagonistic toward the Casino Gang half a year later, given the many half-truths and deceptive arguments they have made in their bamboozling and steamrolling of City Council and the Planning Commission and the public.

Nonetheless, it seems clear that the words are even more apt when applied to City Hall — the decision-makers in the Mayor’s Office, the Planning and Law Departments, and those whose votes on the Council and Planning Commission should and could have protected the City and its residents. (Perhaps, I’d substitute the more damning word “irresponsible” for the adjective “brutish” when targeting City Hall.)  Although deceptive business practices are unlawful in our legal system, we expect businesses to use sharp practices when hundreds of millions of dollars are at stake and often wink at them. However, if our system of government is to work effectively, and ever hope to gain the confidence of the people, we cannot permit those who purport to be acting on our behalf and enforcing the letter and spirit of our laws to passively accept arguments and statements that have no basis in fact or law.

4 thoughts on “phony pylon excuse: STS Steel is simply not in the way”