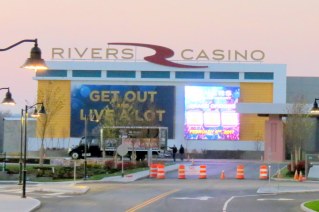 The Rivers Casino at Mohawk Harbor, in Schenectady, announced today that it will open for business on February 8, 2017, a Wednesday. See Gazette article, dated Nov. 16, 2016) The Gazette tells us:

The grand opening date was revealed at an event outside the casino, which is located on the Mohawk Harbor site along Erie Boulevard. Casino executives and local leaders popped champagne and celebrated the announcement as a milestone for the region.

The most recent estimate for the opening had been for March. The del Lago Resort Casino in Tyre, Seneca County, New York, has announced a February 1, 2017 opening. (By the way, earlier this month, del Lago made a $100,000 donation to promote workforce diversity) The Tioga Downs Casino, in Nichols NY, which has expanded from its racino status, opened as a full casino on December 2, 2016; the Montreign Casino, at Monticello NY, is expected to open in March 2018.

Two thoughts after viewing the Casino today from Erie Boulevard and Front Street:

. . . above and below: Rivers Casino viewed from Erie Boulevard . ..

follow-up: We felt a strong need to comment on the fact that February 8 is the anniversary of the Schenectady Massacre of 1690. See our posting “Schenectady’s infamous February 8th“.