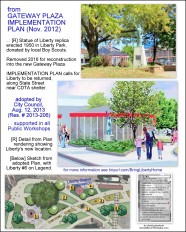 follow-up (March 26, 2018): see “Lady Liberty is Timeless“, where you can find a summary of the facts and issues, with important links and images, in the controversy over the failure to return Lady Liberty to Liberty Park.

At Monday’s Schenectady City Council meeting (March 12, 2018), the issue of Bringing Lady Liberty Home was the subject of my “privilege of the floor” comments to the Council and Mayor. The collage at the right of this paragraph is the handout that I gave to our elected representatives, to remind them that the Gateway Plaza Implementation Plan they approved in 2013 (Resolution No. 2013-206) clearly included the return of the Statue of Liberty replica to her home at Gateway Plaza. There are no safety or financial reasons to alter that Plan. I basically told the Council: This is easy for you: Ask the Mayor to implement the Gateway Plaza Implementation Plan as written — that is, with Lady Liberty brought back home. [For a full discussion of the issues, process, etc., see our prior post, “Bring Lady Liberty Home“, which has links to relevant documents and lots of photos; and see the actual Implementation Plan, the Final Report of the City of Schenectady Gateway Plaza.]

In the past, Schenectady Mayors have used experts — consultant engineers or Corporation Counsel (their in-house mouthpiece) — to justify going back on pledges to preserve parts of Schenectady’s history. Monday evening, Gary McCarthy repeated his refrain that “no final decision has been made yet”, but then added that the Gateway Plaza “design team” recommended not returning the Liberty Statue replica to Liberty/Gateway Plaza. Later that night, I wrote to the members of the Counsel to remind them:

“The ironic thing about the Design Team excuse is that Mary Moore Wallinger, with her LAndArt Studio, has been the primary designer throughout this entire process; was author of the Implementation Plan; and is responsible for construction documents and construction administration. In 2012-2013, Mary never wavered, but showed Lady Liberty back at Gateway Plaza after construction, in every alternative presented to the Steering Committee, Public Design Workshops, and City Council.” [and, in both a photo and the design sketch on the cover of the Plan; see detail to the left, with a blue asterisk placed above Liberty’s planned relocation.]

The Lady Fits. When did the “design team” change its/her mind and start saying that Lady Liberty is too small to fit in, and is not contemporary enough to fit in, at Gateway Plaza? The following rendering of the proposed (and later adopted) view of the Plaza as seen from Washington Avenue and State Street shows, in my opinion, that Lady Liberty fits in well, giving us continuity with our history and a continuing message of welcome that is most relevant to our present and future. (click on the image for a larger version) 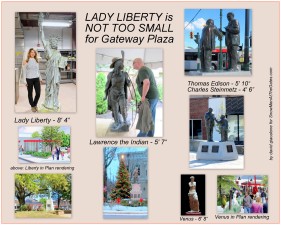 The 100-inch-tall replica of the Statue of Liberty, sitting atop its base, is neither inadequate as a statue or sculpture, nor obtrusive in style, so as to somehow mar or overcome the “contemporary” feel now being stressed by Ms. Wallinger. The Implementation Plan she authored in 2012 and promoted to City Council in 2013, declared that Gateway Plaza is meant to “celebrate the City’s past, present and future.” Our Statue of Liberty does that in a timeless style and dauntless spirit — a spirit of welcome and inclusion that more than ever needs to be highlighted, and a spirit of freedom that is always fresh and yet always needs to be renewed.

My message to the Council on Monday is not a new one: Your Resolutions need to be implemented and the Council needs to fulfill its oversight role to see that the Executive Branch of City government follows the policies made by the Council.

Raise Your Voice. So, please, if you agree that Lady Liberty belongs back home at Gateway/Liberty Plaza, let Mayor McCarthy and the entire City Council know you have neither seen nor heard anything that justifies not following through on the original, adopted Implementation Plan, which made so much sense and was fully supported at the Public Workshops. The Mayor and Designer Mary Wallinger have misled the good folks who support a Veterans’ Memorial at Steinmetz Park, by acting as if Lady Liberty’s future in Schenectady had not yet been decided; they need to come up with a suitable alternative at Steinmetz Park for the values and history represented by Lady Liberty.

follow-up (March 21, 2018): Yesterday afternoon, at the Library of the Schenectady County Historical Society, I found a few items in the Schenectady Gazette I want to share: