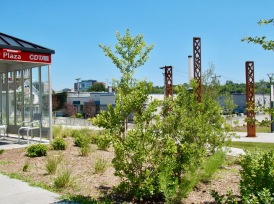 Lady Liberty is indeed timeless. But, Schenectady should not have to wait even one more week for Mayor Gary McCarthy to relent on the strange and belated notion of installing our replica Liberty statue somewhere other than her home in Liberty Park, once construction and expansion of the Park into “Gateway Plaza” was completed. That return was the only alternative for Lady Liberty in the Final Gateway Plaza Implementation Plan, which was created in 2012 and approved in August 2013 (Resolution No. 2013-206). Nevertheless, years later and behind the scene, Gateway Plaza designer Mary Wallinger somehow got the Mayor and Metroplex Chair Ray Gillen to agree to ignore the official Plan and instead to exile Lady Liberty.

Why? Because Ms. Wallinger (who is also Chair of the City Planning Commission) now insists Lady Liberty is not “modern” enough for her current vision of the Plaza as a symbol of Schenectady. She and the Mayor also lured the good folks of Goose Hill into asking to place Lady Liberty in a Veterans’ Memorial in Steinmetz Park, creating totally unnecessary civic turmoil. [for a fuller explanation of the Decision Disruption Process, see this post.]

OUR POSITION: Lady Liberty should be immediately returned from its storage-during-construction to Her original home, Liberty Park (a/k/a Gateway Plaza), and McCarthy and Wallinger should apologize to the people of Goose Hill for offering them a treasure that was not available for relocation.

The Mayor says he has not made his decision yet about where the Statue will be installed. But, there should be no new decision to make. The Decision was made in 2013, in the publicly supported and officially approved Final Gateway Plaza Implementation Plan.  All the Mayor need do now is say that, after full consideration, he fully endorses the Original Decision for returning Lady Liberty after the new Plaza is completed, as there is no safety or fiscal reason, and no other justification, to change a Final Plan. 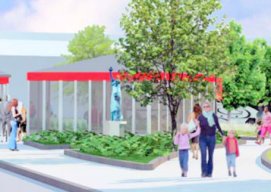 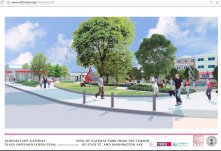 Above is a detail [L] from an Implementation Plan rendering [R], which shows the designated spot for the replica’s return, along State Street, next to the CDTA bus shelter, only yards away from, and more visible than, the Lady’s original location.

Nonetheless, neither a batch of Letters to the Editor since mid-March nor a Gazette Editorial in April supporting the return of the Lady to Liberty Park, has produced Her popular, commonsense, and Plan-promised return. Nor has the coming of Spring and now even Summer, which should make frozen ground excuses a moot issue. Not even a plea in the Gazette last week from Schenectady County’s “Mr. Veteran”, James A. Wilson, did the trick. (“Return Lady Liberty on July 4th” June 27, 2018):

There will not be a better time than to have the famous “Lady Liberty,” or the Statue of Liberty replica, put back in her rightful home in Liberty (Gateway) Park in Schenectady. It’s still the center part of the city for beauty and visibility to all residents and the statue was there for over 50 years.

Put the statue back on the 4th of July.

As of today, July 7, 2018, almost a full year after the Liberty Replica was removed to protect her from construction, Lady Liberty is apparently still in a municipal storage facility.  So, what will it take for the Mayor to step up and Do the Right Thing (or, passively, Not Do the Wrong Thing)? Yes, he has been busy making our City smart, but this is not a complicated decision. It is late, but not too, late for Gary McCarthy to be the Lady’s Champion.

Above: At the end of June, for the first time, the designated spot for the return of Lady Liberty had substantial plantings (several small trees; photo on Right). When asked about the new trees, Mayor McCarthy told Gazette reporter Andrew Beam that he had not known of the planting. Those trees can and should be replanted, to honor the planning process, the City’s promises, and Lady Liberty’s importance in the past, present and future of Schenectady.