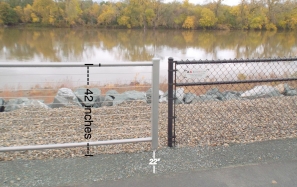 update (Oct. 29, 2018):  With no help from City Hall or the County to delay the installation, the fence is finished, without the needed improvements. . . It is too close to the Path [should be 3′ clearance or more, not 2′], too short [should be 54 inches high, not 42″], and has no rub rail to protect bicyclists. There is adequate space for the preferred 3- to 5-foot buffer, but the installers were instructed to use a 2-foot buffer. The public was never given the chance to raise the issues and the regulators apparently never bothered. See discussion below. 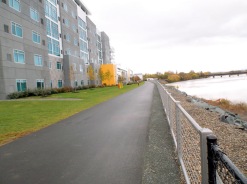 . .  photo to the right shows: 2-foot buffer between Path and guardrail/fence, and sufficient space on the riverbank side to widen the buffer for the safety of all path users and those who come merely to watch the River. 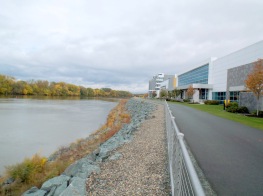 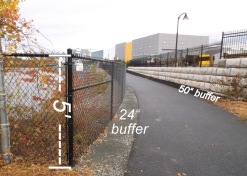 . . at the west end of the Mohawk Harbor trail, the new fence along the riverbank has only a 24″ buffer from the edge of the path; while the wall on the other side of the path has a much safer 50″ inch buffer. 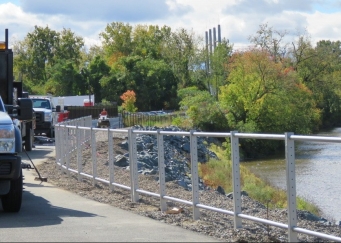 Below is an email message that I sent today (October 15, 2018) to Christine Primiano, the City of Schenectady’s Chief Staff Planner. It outlines why I believe we must halt the installation of a railing/fence along the riverside of the ALCO Heritage Trail in Mohawk Harbor, and seek to achieve a better, safer guardrail. The 42″ high guardrail is being installed only two feet from the paved edge of the Hike-Bike Trail.  Best practices for shared-use paths and relevant regulations call for a 3-foot buffer (including the Bike Schenectady Master Plan adopted just last year). A taller guardrail, with a rub rail, is also needed. Following the regulations and guidelines can help increase the likelihood that hikers, cyclists, tourists and other visitors will avoid injury along the Mohawk Harbor trail and guardrail, and reduce liability exposure by the City and County.

[update (Nov. 5): I have received no reply from the Planning Office, nor Corporation Counsel, nor any other City or County official on these issues. When I visited the Trail on October 14, the fence was only 220′ long, with no cables; when I visited it on Friday, October 19, the guardrail installation had continued, extending at that time almost to the east end of the Landing Hotel, but still without the cable strung.] 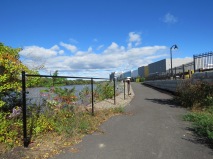 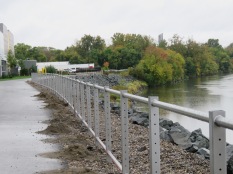 A guardrail is finally being erected between the steep riprap riverbank and ALCO Heritage Trail at Mohawk Harbor. For that I am grateful. But, there are so many ways a guardrail should and could have better protected cyclists, hikers, tourists, and River-watchers (including those in wheelchairs), that I wish there could have been an opportunity for comment by experts and the public.

Given that this is the end of the hike-bike season, and safety cones or caution tape could readily be used to line the top of the steep slope, I believe we should halt the current installation, which as of yesterday, was only about 220’ long, with no cable strung, and then decide how to do it in a way that is more appropriate from a safety point of view for all likely users.


Was the design of this fence and its placement submitted to your Office for review? Did anyone have the opportunity to remind the County or Metroplex that the Bike Schenectady Master Plan states, in the Shared Use Path guidance section (p. B-21 of the Appendices):

“A 2 foot or greater shoulder on both sides of the path should be provided. An additional foot of lateral clearance (total of 3’) is required by the MUTCD for the installation of signage or other furnishings.” 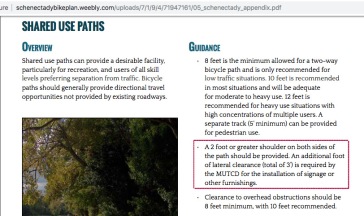 I hope no one in authority will try to argue that a fence 3/4 of a mile long is not a furnishing and not as troublesome as a sign post in presenting a hazard to trail users. A screen shot of the BikeSchenectady page is inserted to the right (click on it for a larger image]; also, click here to see a relevant page from Schenectady’s 2001 Master Bike Plan (mandating a three-foot clearance to obstacles); and a useful page from the Cayuga-Seneca Canal Trail Master Plan. , which explains (at 29, emphases added):

Railings are generally used to protect trail users from steep gradients located close to the edge of the trail. A general landscape guideline from the NYS Building Code is that if there is a sheer drop of 18” or greater then a railing should be provided. In New York State, all railings along bike paths should be 54” high. While there are no specific warrants for providing safety railings where steep slopes are adjacent to a trail, the NYS Highway Design Manual does indicate (Figure 18-16 Safety Railings Along Bicycle and Multi-Use Paths) that a 54” high (1.4 meter) safety rail be provided when a significant slope is closer than 5’ from the trail edge. Sound professional judgement should be used to assess whether the slope gradient, vertical drop or dangerous obstacles on the slope (trees, poles, concrete structures, etc.) warrant the installation of a safety rail.

On Friday, the supervisor of the fence/rail installation firm (Access Anvil Corp.) told me that there was no obstacle to putting the structure three feet from the trail edge, but his specs called for two-feet. Of course, in many places along the slope, there is room for the railing to be the 3-5 feet that many studies and regulatory bodies have said is preferred for the shoulder. That would allow bikes or pedestrians making evasive moves a safer landing, and permit groups of river-watchers (and those in wheelchairs) to enjoy the River without worrying about hanging over or inadvertently stepping back onto the Trail.

For such an important location and project, we need a real discussion of how to do it right. For example, shouldn’t there be a “rub rail” so that handlebars do not catch on the rail? The main “silver” portion being installed is 42” high; the “black” section on the western end is apparently 5’ high. Why isn’t the entire railing 54” high? Would such a long railing/fence be aesthetically more pleasing if it were at different heights and distances from the trail edge? Etc., etc. I don’t know the answers, but I do know a discussion might have produced useful answers and maybe a consensus.

Before more of the railing is installed, let’s pause and decide that Mohawk Harbor and the people using it deserve as good a safety rail as best practices can achieve.

Thank you for your time and review of these important issues. 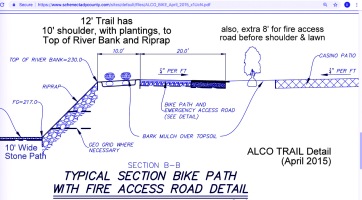 P.S. I still have never been given an explanation for the failure to follow the C-3 zoning requirement that there be the customary two-foot shoulder PLUS ten additional feet buffer on the riverside of the Mohawk Harbor shared-used path. Nor, do I understand why the April 2015 trail submission, posted by the County as Riverside Trail Map, showing 10’ of mulched and planted shoulder between the trail and the steep riverbank was not followed, and we instead have a shoulder of 4 to 7 feet, covered in unstable gravel. [annotated detail from plat inserted at right of this p.s. blurb] 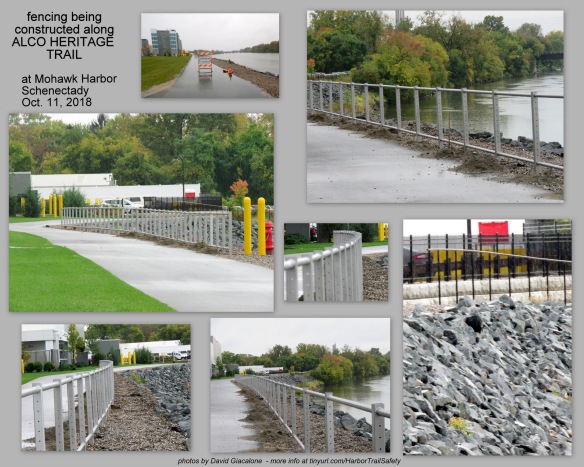 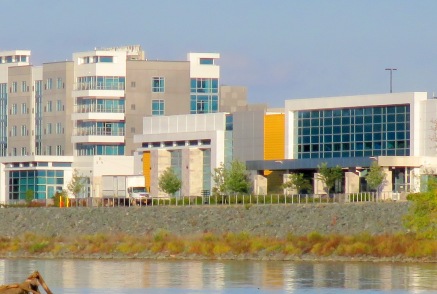 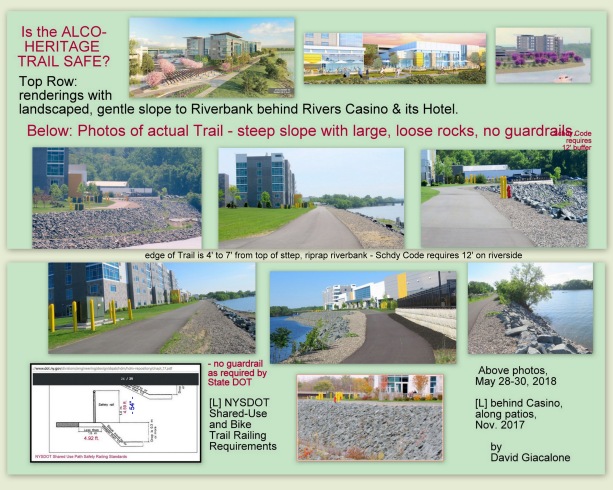 In addition to the points made in the email to the Planning Office, I continue to wonder why taxpayers are paying 90% of the cost of constructing the bike-hike trail, and for the guardrail, when the Schenectady Zoning Code for the Harbor District [C-3, §264-14(1)E(4)] says that: “A single multi-use pedestrian and bicycle trail shall be constructed by the applicant.” “Applicant” refers to the developer or owner of the harbor property.