update (Oct. 29, 2019): With the support of his Four Sure Votes, the Mayor got $2 million more to spend on his “Smart City” project, and the people of Schenectady got left in the dark with the bill to pay. See “City Council adopts spending plan” (Gazette, by Pete DeMola). It is clearer than ever that wise voters must “break up the Mayor’s Council-clique“.

. . . . Yesterday afternoon, I sent an email Letter with Appendix (see below) to Schenectady City Council President Ed Kosiur, and others. My recommendation was that the Council first do its Smart City Homework before allotting another large budget item for the Mayor to use in his Smart City efforts. Unfortunately, as a Gazette article reports (online, Sat. AM, Oct. 26, 2019), the Mayor’s automatic Rump Majority, led by Ed Kosiur and John Polimeni, ignored its responsibilities, and are prepared to force through more Smart City dollars at the Council Meeting on Monday, despite the efforts of Council Members Riggi, Perazzo and Porterfield.

. . .
. . above: Mayor McCarthy on primary night, with his 4-person Rump Majority standing behind him . .
From: David Giacalone
Subject: Please hold up the $2M until you do your Smart City Homework
Date: October 25, 2019 at 1:58:55 PM EDT
To: Ed Kosiur <ekosiur@schenectadyny.gov>, et al
.
Dear Council Members:
.
The Mayor and Council recently announced plans to finally hold publc informational meetings about our Smart City program. Late is surely better than never, unless the cyber-security, data-privacy, and citizen-trust horse has already left the barn.
Sinking more money into Smart Cities before an informed public discussion seems like an act of disrespect to your residents. At the very least, isn’t it poor planning to earmark $2,000,000 Smart City dollars for the Capital Fund before finding out what your residents and electorate want from Smart City technology and what limitations they feel are needed on the use of the data?
That is especially true when Mayor Gary McCarthy has apparently felt no obligation to even keep the Council President, much less the entire Council, in the loop when he is deciding on Smart City purchases and strategies. When venders are called “technology partners” and the notion of making revenue from collected data bandied about freely, doesn’t this Council want to create guidelines, regulations, and protections before allowing even more unsupervised spending on Smarty City initiatives?
WHAT HOMEWORK?  Council members need to know enough about the facts and issues presented by Smart City technology that you feel prepared to spend significant amounts of money constructing a system that will affect the welfare and finances of your City and its citizens for many decades to come. Are you there yet? Or, is it “merely” another two million dollars?
From the perspective of many experts, you have not done your Smart City Homework if you have not had meaningful discussion with well-informed residents. The failure to have the public conversation about what the public wants and does not want, with open discussion of the privacy and data risks, and installation of real cybersecurity measures, should mean that no additional money, or only small amounts of targeted funds, be authorized at this time.
Please read the summaries of three thoughtful Smart Cities articles that are presented in the Appendix below.
Thank you for your time and consideration,
.
David Giacalone, Schenectady NY

P.S. In a thought-provoking article that is discussed in the “Appendix” below, I was concerned to see this sentence: “These technologies range from the mundane (speed cameras) to the fantastical (“Streetlight hubs that host WiFi nodes, license plate readers, environmental sensors, and gunshot detectors)”. “The Future of Living: Smart Cities, Uneven Safeguards” (Washington Lawyer, Nov. 2018P). Note that Schenectady already has that “fantastical technology”, but with no transparency, public input, or disclosure of how security, privacy, and consent are being handled.

APPENDIX
1] The article “Smart cities: good decision-making vital for turning technology into real solutions (from Urban Hub) offers advice that seems worth taking, using the experience of Boston, Massachusetts:
And, especially:
2] Another resource that I hope you will study before appropriating the $2 million is the article “I’m an Engineer, and I’m Not Buying Into ‘Smart’ Cities: Sensor-equipped garbage cans sound cool, but someone still has to take out the trash.” (New York Times, by Shoshanna Saxe, July 16, 2019) Dr. Saxe is an assistant professor of civil and mineral engineering at the University of Toronto.
Here are a few excerpts from Prof. Saxe’s OpEd piece, which is well worth reading in full:
In addition, Dr. Saxe reminds us that:

The most critical question, however, is whether having a smart city will make us meaningfully better at solving urban problems. Data and algorithms alone don’t actually add very much on their own. No matter how much data a city has, addressing urban challenges will still require stable long-term financing, good management and effective personnel. If smart data identifies a road that needs paving, it still needs people to show up with asphalt and a steamroller. 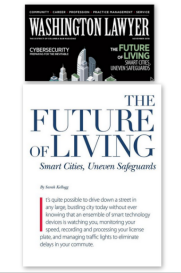 The November 2018 edition of Washington Lawyer (the D.C. Bar magazine) also has an article that I recommend to those who want to make smart decisions about Smart Cities. It is titled “The Future of Living: Smart Cities, Uneven Safeguards” (by Sarah Kellogg). The author talked with and quotes technology, legal and privacy experts. The key points:

An expert of digital forensics and cybersecurity points out in the article that “few are even remotely aware of how intrusive these applications can be in their daily lives. . . Most people below a certain age don’t care about all the sensors in our lives. . . .The folks of a certain age tend to get the privacy dangers.”

“A major issue is Consent. Consent to be monitored may not be a legal requisite, but consent should be obtained from individuals whose data has been collected and massaged to allow the identification of individuals (especially if the buyer of the information can cross-reference it to other data bases), before a municipality shares/sells it to outset entities.”

Updates will be added, as appropriate in this space.