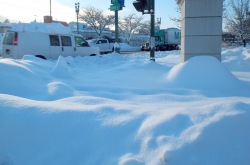 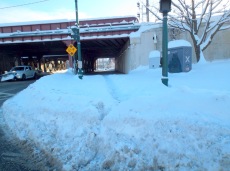 The sidewalks from College St. to Erie Blvd. were also unshovelled. The south side borders a City parking lot. 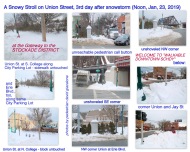 I would not have been walking around Downtown Schenectady at about 9 AM today (Tuesday, Dec. 3, 2019), if I did not have a medical appointment at Liberty and Lafayette Streets. A similar appointment after a snowstorm early this year yielded a dreary walk hobbled by intersection after intersection inhospitable to pedestrians. [click on collage thumbnail to the left] Sadly, despite million$ spent to be a $mart City, all the same problems were on display today. See examples above and below.

Here are two of the corners at City Hall at 10 AM: 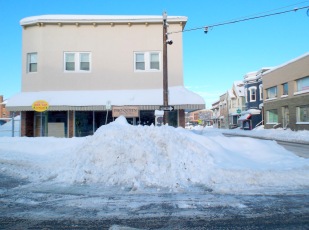 . . in front of Pho Queen at Liberty and State 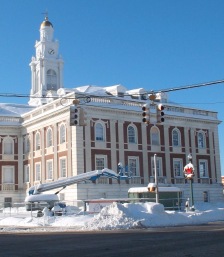 .. crosswalk at Liberty and Clinton 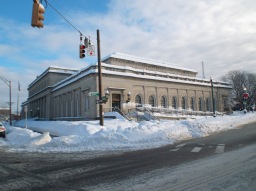 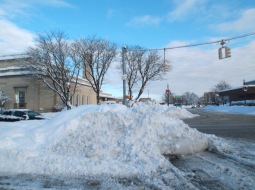 . . below: Seward & Tubman got plowed in at the Library: 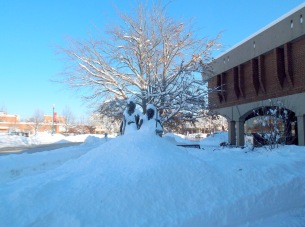 What about Erie Boulevard and State Street, our busiest intersection? Well:

The sidewalks along our new Train Station were equally forgotten:

And, if you want to park along State Street or Liberty or other places with the Pay Parking Kiosks, you could walk quite a way to find entrance to a sidewalk, and still need very high boots to make a payment (and then walk back to place your receipt in your car, etc.) 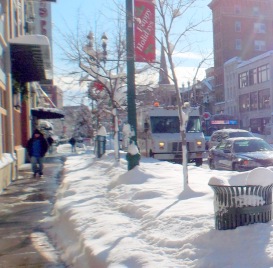 This Sideshow has all of the above photos, and more.

As the City tells us of the wonders and benefits of being a Smart City, with services assumed to be provided more efficiently, let’s talk about the need for Boots on the Ground to make our Downtown safely and conveniently walkable.

follow-up (Dec. 5, 2019): As of the end of the afternoon yesterday, Tuesday, December 4, 2019, most of the trouble spots at corners described above had been addressed by the City (or others), although the Seward-Tubman statues were still plowed in. However, around 5 PM, there were at least three places that I saw in a quick walk around the block needing further snow removal in the Stockade near Washington Ave., Union Street, and Front and N. Church Streets.

Here’s my email message late last night to a few City Officials and the press, along with attached photo collages (click on a collage for a larger version):

The photos below were taken late Wednesday afternoon, December 4, after snow removal trucks and crew worked along Washington Avenue and Front Street in the Stockade.

Please send the crews back to finish the job. As further shown in the collages below, the locations involved include:
1] Cucumber Alley. The Dec. 2-3 snow was plowed only halfway into the Alley, and pushed into a snowbank left at the spot where plower stopped. There is no access for vehicles or pedestrians to the River end half of the Alley, and two feet of snow still blankets that end of the Alley on its paved sections.
2] The NE corner of Union St. and Washington Ave. has been left with plowed snow blocking all pedestrian access to the street. This location is directly across from the YWCA, with its child care center.
3] The corners at North Church Street where it ends at Front Street. Snow plows pushed snow onto both corners, allowing no pedestrian access to or from the sidewalks or the street.
Please direct work crews back to these locations and problems.
David Giacalone
16 Washington Ave. Apt. 3, at Cucumber Alley 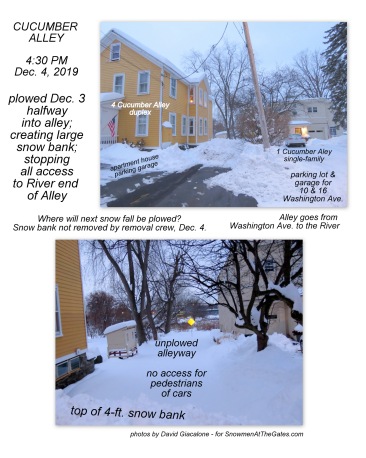 update (Dec. 12, 2019): On Wednesday, December 11, 2019, one week after the email message above (and another the morning of Dec. 11), Cucumber Alley was finally unencumbered of the snowbank blocking the second half of the Alley from vehicle and foot traffic. To wit: 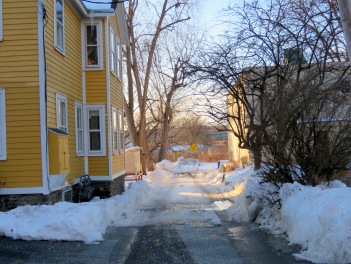 Should we be optimistic about the next big snow storm?

Neither of the two other problems depicted below were remedied as of Thursday afternoon, December 12. 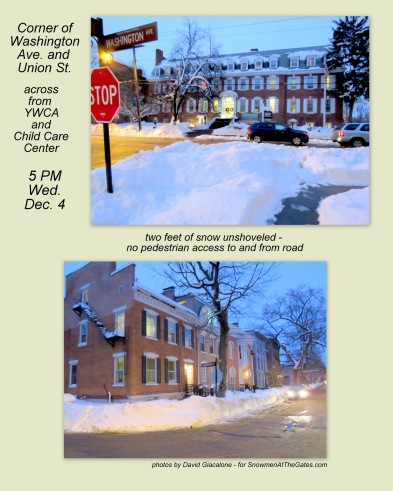 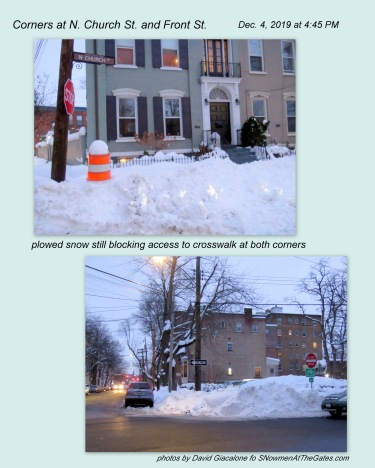 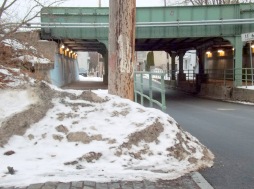 followup (December 30, 2019): My photoshoot on December 26 of the new mural welcoming people to the East Front Street Neighborhood (see posting at “suns along the Mohawk”) was momentarily stymied when I came upon this frozen reminder of the infamous December 1, 2019 Not-So-Smart-City snowstorm (photo on the right), and its aftermath and uproar, with its unplowed streets, plow-created obstacles, and un-shoveled sidewalks. This particular sidewalk runs along City property (the Front Street Pool lot). I ended up crossing the street and shooting from the opposite side of the underpass. Today, Dec. 27, I sent a photo and a plea for help to Paul Lafond, General Services Commissioner. Twelve minutes later, Mr. Lafond wrote back that he sent out a crew to handle the problem. I appreciate the quick reply, of course, but do not believe residents should have to report problems that City workers and City Smart Cameras must have seen for three weeks.