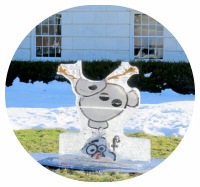 As you may know, given the name of this weblog and its content, the proprietor believes Schenectady has been suffering the ill effects of having Snowmen at its Gates since the tragic night of the February 8, 1690 Massacre, when the appointed sentries were having a drink at the Mill Lane pub, and only two snowmen were “guarding” the Stockade gate.*/  Naturally, the Stockade and its Gate, along with the guards, were meant to protect the residents of Schenectady.

Harkening to that history, we fervently believe our current Mayor-for-Life Gary McCarthy, in addition to supporting the new craft brewery at Mill Lane, vastly prefers appointing and re-appointing “snowmen” — silent, deaf, and weaponless citizens, who melt if subjected to heat — to Schenectady’s Boards and Commissions, and naming managers to important City jobs with similar attributes. The result is “enforcement” of Schenectady’s laws and regulations that appears to serve the Mayor’s favorite causes, people and enterprises, rather than serving the public interest. See, our Snowmen Effect Category of posts, and “McCarthy only wants snowmen on his Planning Commission“.

*/ By the way, the Stockade gates had been left wide open on the night of the 1690 Massacre, inviting attack, because the mostly-Dutch villagers did not like having a newly-appointed Englishman in charge. So, they ignored his orders to remove the high snow blocking the entryway.  As a result, Indian scouts reported back to their French commanders that the Schenectady gate was wide open, while Albany was well-guarded, making Schenectady the better choice for attack.

We are also quite keen on irony and twists of humor here at Snowmen at the Gates. So, this week, it was with a gleam in our eyes that we spotted Frozen‘s famous snowman Olaf “guarding” City Hall. More precisely, an ice sculpture of Olaf by Charlie Jones, of “The Ice Man Custom Ice Sculptures“, was on duty near the main entry stairway on Jay Street, a leftover feature of last Saturday’s City Hall-iday“. 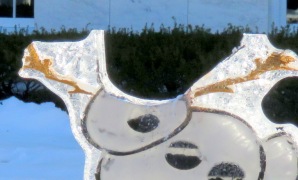 An article last week at Polygon.com defends Olaf’s evolving character in Frozen 2, as “much more than comic relief” (by Lauryl Fischer, Dec. 4, 2019), concluding that:
.

For kids, Olaf’s meta-narration is a lot like a warm hug. It’s a reassurance that everything’s going to be OK, because this is just a story. From a child’s perspective, the Olaf-recaps-Frozen gag in the middle of the film isn’t just hilarious; it’s a reminder to kids that stories are funny, and fun, and they may get scary, but can still have happy endings.

.
Here in Schenectady, however, an Ice Olaf gives cold reassurance to a populace about to endure four more years of Mayor Gary McCarthy. To overcome the curse of the Snowmen at the Gates, we need strong warm bodies at City Hall, with open minds, eyes and mouths, equipped with fully-operating and courageous brains. Is that too much to wish for in this Season of Hope?

P.S. To help celebrate Olaf’s visit to our lovely Downtown, I have put together this one-page 2020 calendar, formatted for an 8×10″ print, for you to download and use for any non-commercial purpose.
.