New signs were installed last week at Union Street intersections in the Stockade (two examples above) to keep vehicles from parking on the fancy brick “bump-outs” constructed more than two months ago. The “No Standing Here To Corner” signs confirm arguments made in our prior posting “our curb-less curb extensions” (July 7, 2020). The post explains why “bump-outs” without curbs fail to achieve the safety goals attributed to the traffic mitigation device called curb-extensions.

Instead, the so-called “bump-outs” of inlaid brick, which were created at the behest of Stockade Association leaders, are at best expensive and ineffective, and at worse likely to cause a false sense of security for pedestrians and others expecting safety improvements on our streets. In a nutshell: Without curbs setting them off from the street, brick bump-outs are not extensions of the sidewalk, they are part of the roadway, where vehicles are likely to park, blocking sight-lines, and over which vehicles are likely to travel, especially when making a tight turn. [see examples in collage below taken Aug. 20, 2020] Moreover, because without bricks they do not reduce the size of the roadway at the intersections, they are unlikely to achieve the other major goal of such traffic mitigation devices: reduction of the speed of vehicles.

The “No Standing Here To Corner” signs installed last week by the City at each of the Stockade bump-outs (click on collage below this paragraph) are a tacit admission that drivers have been, and are likely to continue, parking on the curbless brick bump-outs. Our prior post pointed out that such signs were a lot less expensive and a lot more effective than the fancy brick pavement now adorning the Stockade’s Union Street corners. As installed, the bump-outs do little or nothing to assure the goal of more “daylight” and better visibility at the intersections, as they cannot ensure that vehicles are parked sufficiently far back from the intersection. 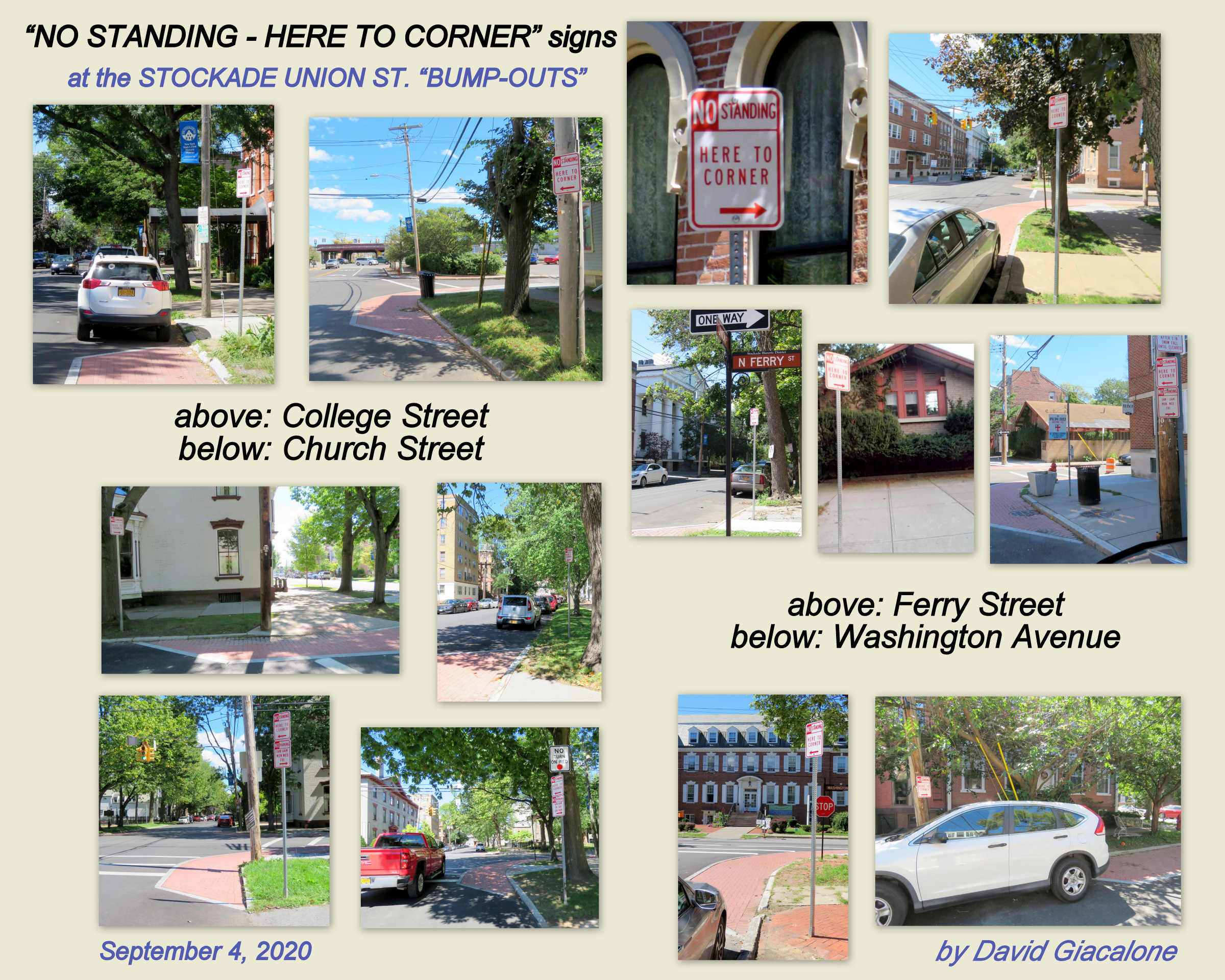 A New York State guideline on traffic calming and safety points out that vehicles can be expected to drive around, and not to park on, actual curb-extensions. When necessary, however, emergency vehicles are capable of driving over a curb to make a turn — far more easily than driving over a parked car that is in the way.

Despite the signs, many persons waiting on those bricks to cross the street, whether on foot, in a wheelchair, or on a bicycle, may not realize that they are waiting in the road, with less protection than if they were back on a sidewalk and behind a curb.

follow-up (Jan. 14, 2021): (1) No Longer a Pretty Face. Only six months after their installation, I’m afraid that dirt and grime (from tires and snowbanks) have eliminated the “pretty face” aspect of the bump-outs, which had at least pleased neighbors unworried about safety factors. [Photo to right taken Jan. 14, 2021, at Union and S. Church St.] (2) Pandemic Package Delivery: The great increase in vehicles bringing packages to Stockade buildings due to “pandemic” online shopping (including groceries), or fulfilling “take-out orders” from food vendors, has meant that far too often the curbless corner fancy bricks have a delivery vehicle of some sort parked on them while one or more deliveries is being made. With the cars of at-home workers taking up parking spaces normally empty during the day, the “bump-outs” are often the only “available” place to leave a delivery vehicle. 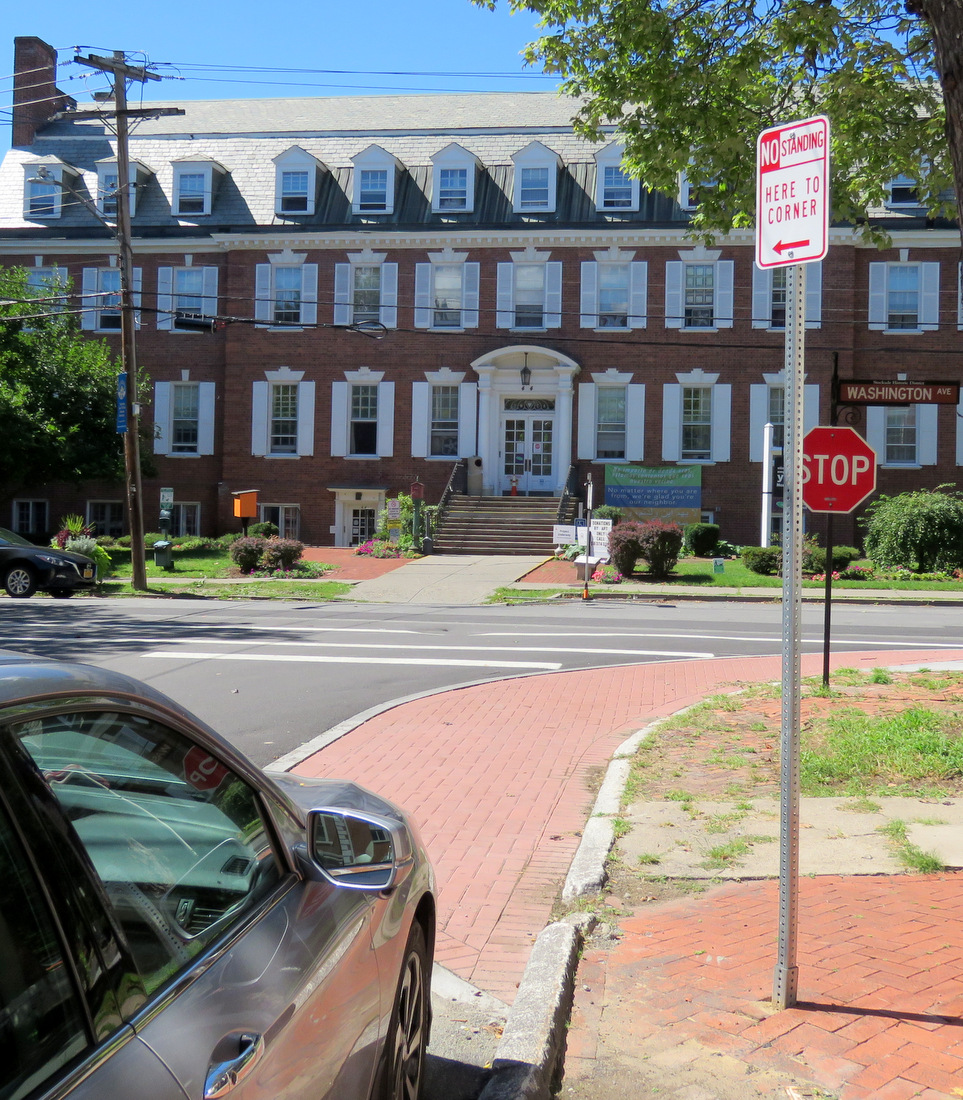 ADDITIONAL COST. In addition to the original high cost of installing the “pink street tattoos” at 12 Stockade corners, the City has now paid to install one or two of the new signs at each “bump-out”.  The signs, of course, only help solve the parking on the bricks issue. They do not narrow the street to calm traffic, nor shorten the crosswalks for pedestrians or prevent tight turns, which properly constructed curb-extensions are meant to do.

Clearly, the signs by themselves will not stop drivers parking too close to the intersections.

WHY NO CURBS. The only “explanation” I have received for the lack of curbs came on August 19 from Stockade Association president Susanne Unger. Suzy wrote:

I was given to understand [from City Engineer Chris Wallin] that they had to be flush because the handicapped ramps had already been installed.

There are many replies to that faulty reasoning.

I’m still hoping that someone on City Council and/or in the media will take enough interest in these issues to find out the cost of the useless bump-outs, and the added No-Standing to Corner signs, and discover how the decision was made to leave out curbs, and later not to fix the bump-outs to bring them up to the definition of a curb-extension.

The Stockade Streetscape Plan, which was the source and instigation for installing bump-outs on Union Street, told us that “bump-outs, if designed properly, will be one of the most effective means of providing pedestrian safety.” (emphasis added). Furthermore, the Streetscape Plan asserts often that “The City will not approve a bump-out that cannot be designed for both safety and function.” That promise was not kept.