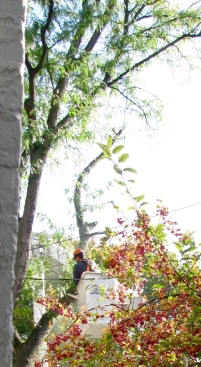 Little did Devin and I know last week (October 14) when we watched a crew trimming the locust tree in front of 33 Front Street that it was being groomed for an execution six days later.

When I heard on Wednesday afternoon that the mature, healthy-looking shade tree in front of Nancy and Fred Jonas’ home had been chopped down earlier that day, I made a quick stop to see the (irrevocable) carnage and take a few photos.

– tree stump with sawdust in front of 33 Front St. the day the tree was chopped down – 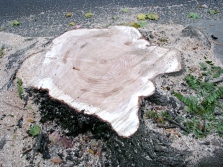 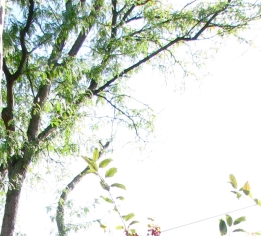 As you can see, however, the roots of the tree had disrupted the adjacent sidewalk.

Was the tree ill despite its apparent good health? No. Was the buckled sidewalk enough to seal its fate?  Did the tree offend someone in some other way?  Was every alternative adequately considered before permission was given and the decision was made to remove the tree? I later learned that it was the inconvenience of dealing with the various leaves, twigs, and similar droppings, that made the owners want it removed.

As the masthead above suggests, I think we should do all we can to preserve every healthy tree in the Stockade .  More than ever, I  believe — as argued in a posting on June 18, 2010 — that “Schenectady needs a tree preservation policy.”

The City of Portland, Oregon got it right on its Parks and Recreation webpage (emphasis added):

STREET TREE REMOVAL: for trees growing in the right-of-way, between the curb and sidewalk:

Portland’s urban forest is a valuable asset, and all trees on public property are protected. Trees provide increasing benefits as they grow, and mature trees are an asset that requires decades to replace. Urban Forestry carefully considers each and every request to remove a street tree, and encourages tree planting, regular tree maintenance, and alternatives to tree removal except where no viable alternative exists. Street trees can only be removed if they meet the criteria of being dead, dying, or dangerous. Conditions that do not warrant removal include the tree dropping fruit or leaves, the tree being perceived as too tall or making too much shade, or the cost of routine maintenance.

What do you think?  I hope Devin will be around to benefit from the beauty, shade and other attributes of the tiny tree that is purportedly going to be planted to replace the mature one felled this week.  I fear that neither I, nor the rest of my Baby Boom generation neighbors, or our elders, will be so lucky, especially since the replacement trees are not actually meant to be tall enough to reach true shade tree status.

[Follow-up: the Jonases had the stump quickly removed and then had a new sidewalk poured over the spot. No replacement new tree was planted. update: Still no replacement tree, March 20, 2016.]  Please tell our local leaders that we need a tree preservation policy in Schenectady — especially for the Stockade and other historic districts.

follow-up (October 26, 2010):  Thanks to Tom Hodgkins of N. Ferry St., I can present a more complete image of the felled locust tree:

Here are two other photos captured from 2007 Google Street Views: 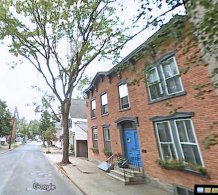 That locust tree was responsible for creating some great shadows on the sunny day we had a month before its demise, at the 2010 Outdoor Art Show:

follow-up: By the September 2013 Outdoor Art Show, the magic of shadow and light was long gone. More tragic, 33 Front Street was For Sale, meaning that the tree died to save a few years of sidewalk raking and perhaps gutter cleaning. Incidentally, the new owners, not knowing my past interest in that tree, asked me the day I met them on their front stoop why that house had no tree, when the pattern suggested that each house would have one. I think my reply might have been “Don’t get me started.”

2 thoughts on “farewell to a fine tree”