follow-up (Aug. 4, 2017): Galesi Group and Mohawk Harbor have opened a new chapter in their Pylon Tales. See “another sneaky pylon ploy?” (Aug. 4, 2017). This time it’s a non-casino pylon that raises some interesting issues, despite its reduced size (34′ by 14′). Also, see “update on the proposed Mohawk Harbor pylon sign” (Aug. 11-15, 2017); and “BZA denies variance for oversized Mohawk Harbor pylon” (Oct. 4, 2017). NONETHELESS, Update: After Metroplex Chairman Ray Gillen literally begged them for “a favor”, they changed their mind at a hastily-called Special Meeting: “BZA’s pylon flip-flop – a change from 221″ wide to 220″ wide!” (Nov. 16, 2017).  Click for a copy of David Giacalone’s Comments to BZA regarding the Special Meeting.

Pylon Directory:  This is a list of our posts and Comments discussing the proposed 80′ x 38′ Schenectady casino signage pylon and its 32′ x 19′ digital display: 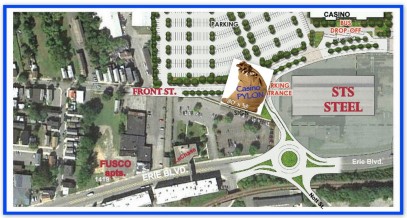 our Pylon in a Poke .

“beware the Zombie Pylon” (March 23, 2016). It ain’t dead yet.
“Mayor McCarthy defends the casino pylon” at the League of Conservation Voters forum (September 22, 2015)
.
“bait and switch along the Mohawk” (July 31, 2015) suddenly we have a v-shaped pylon with an LCD screen on each wing.
.
– “casino site plan approved: pylon, too” (July 22, 2015). And, the pylon will be bulkier, brighter and wider than expected.
.
– click here for a pdf version of David Giacalone’s Comments to the Commission regarding the Casino Pylon, dated July 22, 2015
.
– “the Commission should require a better pylon” (July 20, 2015) The Planning Comn has the power to insist on a safer and better-looking pylon.
.
– “a Pylon Precis: too big, too bright, too  much” (July 16, 2015): a comparatively pithy summary.
.
– This posting “pylon envy?“ (see below): compares the Sch’dy pylon to classic Las Vegas signs and a massive new sign in Cincinnati; it also compares the signage rules that apply to all other businesses in Schenectady but not to the Casino
.

– “phony pylon excuse“: uses photos, maps, and other images to explain why the excuse that  the STS Steel Building blocks the view of the casino is simply untrue

– “shrink that Casino pylon“: explains why the proposed pylon is the wrong size at the wrong location; looks at the Des Plaines Rivers Casino, which is too large and too bright at night although “only” 68 ft. tall; worries the Schenectady pylon would become an inappropriate symbol of Schenectady