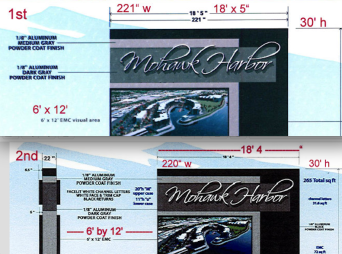 This evening (Thursday, Nov. 16), with virtually no discussion among themselves, the Schenectady Board of Zoning Appeals granted Mohawk Harbor’s request for a large, strip-mall style pylon sign, 30’ high, 220″ wide, with a 6′ x 12′ LCD screen and 22 lighted tenant signs. Brendan Keller, the Board member who had moved its rejection on October 4, moved its acceptance this time, noting that bigger [than the 22′ pylon approved on the sly on November 1] was better and that it was “not a significant” variance. The Code of Signage Regulations calls for a limit of 7′ H on a freestanding sign, with an area of 25 sq. ft. if the parcel is not a shopping mall, and 75 sq. ft. for a shopping mall.

This renewed Application was virtually unchanged from the rejected October 6 version — except:

Zoning Board Chairman James Gleason said the application was modified from the one the board rejected on Oct. 4, and the board collectively determined the variance was not significant. Board members who opposed the sign in October were primarily concerned about its size, according to meeting minutes.

update (Nov. 19, 2017) BZA Minutes: Much more quickly than usual, the Board has posted the minutes for the November 16, 2017 BZA Special Meeting to review Mohawk Harbor’s pylon sign Application. (E.g., the Minutes for its Nov. 1, 2017 regular meeting are not up as of this morning, Nov. 19.) I’d like to make a few points about this summary of the Special Meeting:

Here are the conclusions in the Minutes, which I believe should embarrass each member of the Board of Zoning Appeals:

Mr. Keller stated that he believes that the bigger sign looks better and is more in keeping with the scale of its surroundings. Mr. Connelly and Mr. Gleason agreed.

Motion by Mr. Keller, seconded by Ms. D’Alessandro-Gilmore, to approve the Area Variances based on the following findings of fact:

1. No undesirable change will be produced in the neighborhood.

2. The benefit sought by the applicant cannot be achieved by another method.

3. The variance is not substantial.

4. There will be no adverse effect on physical or environmental conditions in the neighborhood.

5. The alleged hardship is not self-created

To use a legal term I remember from law school, these findings are a joke. They surely do not pass the “blush test” — whether an assertion can be made without blushing. Of course, the scariest thing may be that the members of this Board and of the Planning Commission in Schenectady can no longer blush when asked to ignore the law and common sense by a special few members of the business and development community.

This quote from Wikipedia on “Variance (land use)” is a good summary of the variance issue:

In either case [an area/dimension variance or a use variance], the variance request is justified only if special conditions exist on the lot that create a hardship making it too difficult to comply with the code’s normal requirements. Likewise, a request for a variance on a normal lot with no special conditions could judiciously be denied. The special conditions or hardship typically must arise from some physical configuration of the lot or its structures. The financial or personal situation of the applicant normally cannot be taken into consideration. Under most codes governing variances, approval of the variance must not result in a public health or safety hazard and must not grant special privilege to the property owner. In other words, when a variance is granted, any other property owner with similar site conditions should be able to obtain a similar variance; this criterion is often addressed by citing precedent.

There are many other points that could and need to be made, but I will stop now by citing interested readers to the Zoning Board of Appeals guidelines published by the NYS Department of State (2005, reprinted 2015), and reminding BZA of this quote (at p. 19, emphasis added):

The statutes codify what the courts had previously held: When granting either a use or an area variance, a zoning board of appeals must grant the minimum variance that it deems necessary and adequate, while at the same time preserving and protecting the character of the neighborhood and the health, safety and welfare of the community. Thus, the board need not grant to an applicant everything he/she has asked for. Rather, the board is required to grant only the approval that is absolutely necessary to afford relief.

It is difficult to quantify “substantiality.” The board should, however, make a reasoned judgment as to whether the nonconformity being proposed is too great, as compared to the lawful dimensions allowed by the zoning law. Some courts have looked favorably upon a board’s application of a simple mathematical analysis. In Heitzman v. Town of Lake George Zoning Board of Appeals , the court upheld the denial of a variance based in part on the showing that construction would have exceeded the allowable lot coverage by 15%.

Just seventeen days ago, after virtual begging by Metroplex Chairman Ray Gillen, BZA granted a variance to permit a 22’ tall, 122 sq. ft in size, at the same location, in a spot where the City’s Sign Regulations limit such signs to 75 sq. ft and 7’ tall.

The motion to grant this newest application states that the variance is not significant. Other businesses in Schenectady may take this as a good precedent for larger, more distracting signs, with larger and brighter LCD screens.

Only Paul Fallati, on behalf of Mohawk Harbor, spoke in favor and, only I [David Giacalone], spoke in opposition. I started by reminding the Board that the Intention provision of our Signage Code, §264-59, states that the article is intended:

“to reduce sign or advertising distractions and obstructions that may contribute to traffic accidents, reduce hazards that may be caused by signs overhanging or projecting over public rights-of-way, provide more visual open space and improve the community’s appearance.”

I also pointed out:

This afternoon (Nov. 16, 2017), after receiving a copy of my Comments, Camille Sasinowski, President of the Goose Hill Neighborhood Association, sent the Board an email saying:

My neighborhood association is in complete agreement with Mr.Giacalone’s comments and recommendations.

I would also add that, now that the trees are leafless, additional bright and glaring light will further contribute to our neighborhoods further erosion. Perhaps the lighting should be planted nearer the new harbor housing. What kind of reaction would be expected? The tenants certainly would not tolerate such an intrusion. However, residents that have been paying taxes and keeping this City running are being treated like 2nd class citizens.

The breaks have to be put on.

Camille A. Sasinowski,President of the Goose Hill Neighborhood Association.

By the way, this surprise “Special Meeting” of the Board was called with two days’ notice. Despite my prior significant interest and contribution in this matter, I was not given notice by the Board’s staff of tonight’s meeting, nor of the Nov. 1 regular meeting. 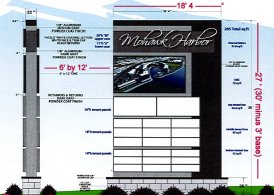 follow-up re Area of the Sign (Nov. 16, 2017, evening): I started wondering this evening why the Board of Zoning Appeals, like the Planning Commission this summer, accepted the figure of 265 sq. ft. for the proposed 30′ tall pylon sign that was given to them by the Applicant, Paul Fallati for Mohawk Harbor.  Not counting its 36″ high base, the pylon is 27′ by 18′ 4″, which seems to yield an area of 495 square inches.  Click on the image to the right to see the sketch provided by the Applicant showing the dimensions; I have repeated the main numbers in red in a larger font to make them easier to read.

AREA OF THE SIGN The area of all lettering, wording, and accompanying designs, logos, and symbols, together with the background on which they are displayed, whether open or enclosed Where the sign consists of individual letters, designs or symbols attached to a building, awning, wall, or window, the area shall be that of the smallest rectangle which encompasses all of the letters, designs, and symbols. The structure supporting a sign shall be excluded unless the structure is designed in a way to form an integral background for the display. Only one face of a double-faced sign shall be counted as surface or area of such a sign.

The LED screen, called “ECM” by the Applicant, is of course a sign within the above definition.