Take a look at a 2007 Google Map Street View photo of North Ferry St. the year before it was repaved:

Here’s the same view from the next Google Street View (2011), after the “streetscape improvement” deforestation of 2008:

The only shade tree survivors in view are not along the City’s right of way, but are (fortunately) located on the property of St. George’ Church.

follow-up: Unfortunately, the shade trees along the front fence at the entrance of St. George’s were removed, and others trimmed back significantly, in order to avoid any liability for fallen branches. Click on the thumbnail collage to the right for before and after comparisons.

According to a report in the March 2016 Stockade Spy (at 6), the Stockade Association’s Infrastructure Committee met with Schenectady City Engineer Chris Wallin and staff members on February 15, and:

City staff stated that the process used to improve the streetscape on Ferry Street was preferable to the one for Washington Avenue.

How do the two approaches differ? The No. Ferry project took out all mature trees between the curb and sidewalk, it also replaced all sidewalks (regardless of their composition or condition). The Washington Avenue repaving spared the trees, leaving decisions about the sidewalks for future resolution. [To see more No. Ferry St. Deforestation, click on the collage to the right.]  Assistant City Engineer Pete Knutson confirmed the Office’s preference for the No. Ferry process in a series of emails with the editor of the weblog on March 22, 2016.

Which post-paving streetscape do you prefer?

No. Ferry Street [L] or Washington Avenue [middle and R]?

follow-up: The large street trees along 19 – 25 Washington Avenue, called Campbell Row, were taken down in 2018, at least two of them were healthy, but removed after consultation with the City Engineering Department, because roots had to be cut during sidewalk repair. Click on the thumbnail collage to the right to see before and after images.

The City Engineer and, obviously, our Mayor Gary McCarthy, prefer to clearcut the trees in the City’s right of way to avoid any (tenuous) future liability should a tree which remains after losing some of its root system topple many years later. What is it worth in dollars, environmental, social, and economic benefits, civic pride, and aesthetic pleasure for residents, visitors, and tourists, to save our street trees?  Shouldn’t we take the time to seriously consider the options available to us other than virtual clear-cutting, before needlessly taking down a tree that is not dead, dying, or dangerous, in the name of “streetscape improvement” or liability avoidance?

Improved? Here is the 2007 Google Street View pre-improvements, looking south mid-block on N. Ferry St.[L], and the view in mid-April 2016, after 8 years of new-tree growth [R]: 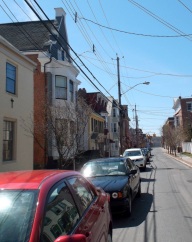 S.O.S.Trees, the Save Our Schenectady Trees campaign, is being launched this month, in response to the City Engineer’s revival of a method we thought we had beat back for good in 2010. For more information and links to photos, click on the Save Our Trees tab in our masthead.

And, please come to the S.O.S. Trees information and organizing Meeting, at Arthur’s Market, Noon on Saturday, April 30th. 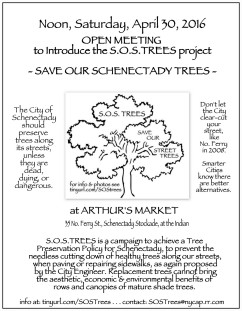 Click for a printable copy of our Meeting Announcement. 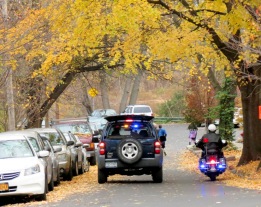 . . .   p.s. To the left is another view of what Washington Avenue looked like a few weeks after it was repaved in 2014, looking north toward the River from Cucumber Alley, with its trees spared and sidewalks untouched: