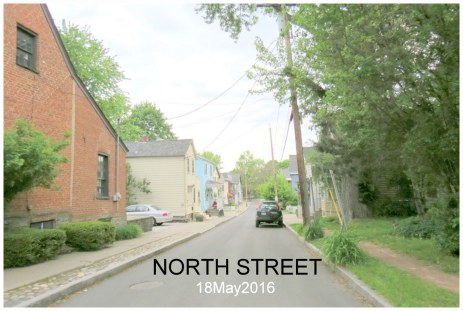 . . “I remember many years ago when North Street had many beautiful large healthy trees that were cut down. The street has some small trees which will never replace the huge trees. The street looks naked without those gorgeous trees.”

“I would rather ‘watch my step’ on uneven sidewalks than walk down a street without the shade and beauty of those large trees.“

. . Jessie Malecki, Letter in the Sunday Gazette,”Stop the senseless cutting of trees, especially in historic districts” (May 15, 2016)

Jessie Malecki has lived in her Stockade house on North Street her entire life – more than 90 years. Earlier this month, the Gazette published another of her strong, insightful Letters to the Editor. Jessie’s topic this time was ending the unnecessary removal of our valuable street trees. At the top of this post are two salient quotes from the Letter, which is copied in full below and well worth your perusal.

Jessie mentioning the prior existence of large street trees on North Street sent me searching yesterday afternoon for old photos of the one-block, one-lane thoroughfare, which runs north from Front Street to Riverside Park, just east of Lawrence Circle. In my brief exploration, I was able to locate only one photo, at the Schenectady County Historical Society. It is shown immediately below, in a collage that features the March 1914 picture alongside a photo taken last week by me of the now “naked” North Street, looking north from mid-block. (Click on the collage for a larger version.)  As you can see, in 1914, flooding caused by ice jamming deposited ice floes and chunks well down the block. The angle is not optimal for viewing the curbside trees, but they clearly outnumber the current array, which is basically comprised of the species poleis-utilitus (utility poles).

I’m sorry I could not find more old photos from North Street. If you have one, especially with the tree fully foliated, please let me know.

Thought people from my area would like to see North St. in 1914 (ten years earlier from my time – my house is the third down on the left) during the flooding, which in 8/28/2011 would be just about the 100 year flood.

In the 2016 photo, Jessie’s house is the 4th house on the left, with the orange awning. Please join Jessie voicing your well-reasoned opinions at the Gazette, or local news medium of your choice.

For more on our campaign to have a street tree preservation policy enacted in Schenectady, scroll down our web home page, and see our S.O.S. Trees portal.

Letters to the Editor (Schenectady Daily Gazette, Sunday, May 15, 2016)

Stop the senseless cutting of trees, especially in historic districts

Schenectady, and especially its historic districts, are fortunate to have so many large trees along our streets. Cutting them down when it is not necessary is a terrible waste that makes our city less beautiful, inviting and healthy.

Therefore, it is most important that a tree preservation policy be adopted and implemented for Schenectady so trees in the city’s right of way (between the curb and sidewalk, and in the medians) are preserved unless an individual tree is dead, dying or dangerous. That means alternatives to tree removal must be considered and employed, except where there is no viable alternative.

There should be no excuse to cut down a healthy tree because it causes litter to the homeowner. Trees not only bring shade to our homes but beauty to our landscape.

I remember many years ago when North Street had many beautiful large healthy trees that were cut down. The street has some small trees which will never replace the huge trees. The street looks naked without those gorgeous trees.

North Ferry Street was so beautiful with their large trees but they were all cut down to replace the sidewalks. Fortunately, St. George’s Church property has some gorgeous, huge trees.

Walking on Washington Avenue, it is a delight that the large trees were not eliminated because of the outcry of the residents there. I would rather “watch my step” on uneven sidewalks than walk down a street without the shade and beauty of those large trees.

Both the Historic District Commission and the Planning Commission may initiate a study or make recommendations for new policy, laws or regulations and it should do so, even if not specifically requested by the mayor or City Council.

If you would like to preserve our Schenectady trees, email Chuck Thorne at Cthorne@schenectadyny.gov and he will distribute your letter to the mayor and City Council on your behalf. Or write: Chuck Thorne, City Clerk at City Hall, Jay Street, Schenectady, NY. 12305.