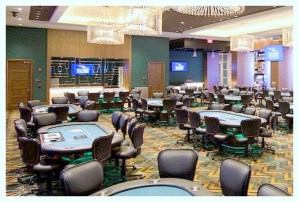 Despite good media coverage and optimism for River Casino’s roll-out of daily Poker Tournaments last week (see Times Union & Gazette), Schenectady’s Mohawk Harbor Casino posted record-low weekly revenue numbers for the second week in a row, with generated dollars down for the 7th time in 8 weeks. Total GGR for the week ending April 16, 2017 was merely $2,532,004, down  5.2% from the prior week’s nadir. Indeed, its Poker Table GRR during its first week of daily tournaments went down 12.9% from the prior week. And, slots GRR tumbled another 9.7%. Meanwhile, Capital Region competitor, Saratoga Casino and Hotel saw a 6.0% drop from its prior week’s Net Win numbers.

For Rivers, it’s the lowest weekly revenue figure since its opening in early February, and it came despite a series of poker tournaments during the week.

The poker room has been popular among casino customers, officials have said.

Observers have suggested that extensive roadwork on Erie Boulevard outside the casino may have played a part in the decline. . . .

The casinos haven’t released attendance figures, so it’s not clear how the restaurant and other food outlets have performed.

follow-up (April 28, 2017): Finally some good news for Rivers Casino Schenectady and those counting on its revenue stream. For the week ending April 23, 2017, GGR were $2,866,673, up 11.6% from last week’s lowest-ever figures. See the Official Weekly Report. A screen shot of the April numbers is immediately below this blurb. The Net Win figures up the road at Saratoga Casino were up 3.9%.