Two days ago (April 23, 2019), I had two surprises when I left the Stockade neighborhood with my camera looking for 2019 cherry blossoms. (To see blossoms in the Stockade this year, go to “suns along the Mohawk.)

One surprise was pleasant and one was not.

PLEASANT SURPRISE: For the past few years, I have been amused by the cherry blossoms inserted by Rush Street Gaming in the renderings it used to depict the first set of plans for Rivers Casino at Mohawk Harbor. E.g. see image on the right. For example, on April 26, 2015, I wrote in a posting at this site:

By the way, in its environmental remarks to the Location Board, concerning impacting nearby neighborhoods or historic sites, Rush Street the Applicant said there are design elements of the project that reflect the Stockade influence. Perhaps they mean the cherry blossoms that will apparently bloom all year long at Mohawk Harbor’s Casino, but only about a week in the real Stockade District. 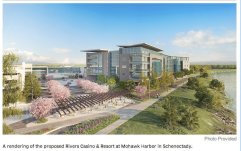 I had not yet seen cherry blossoms outdoors at Mohawk Harbor, and certainly not along the entrance to Rivers Casino, as shown in the rendering.  But, given the emphasis on cherry blossoms to the rear of the Casino-Hotel and near the riverbank (see rendering at Left and immediately below to the Right),  I decided to check out the situation while out hitting other blossom spots outside the Stockade. 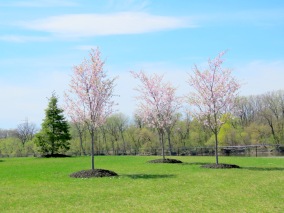 Although I did not find the robust mini-groves of trees indicated in the Casino’s renderings, nor groupings that might one day be robust or mini-groves, I did find a few young trees with cherry blossoms abloom, east of The Landing Hotel, on the casino-side of the ALCO bike-pedestrian path. See the trees pictured on the Left and at the top of this posting. There may be others that are not healthy enough to bloom or that are late-bloomers, but three healthy cherry blossom trees at Mohawk Harbor counts as a pleasant surprise, given the track record of the developers and of public servants charged with assuring compliance with plans.

UNPLEASANT SURPRISE.  About a half hour before arriving at Mohawk Harbor, I stopped for my annual viewing of the beautiful array of cherry blossoms in front of Schenectady’s City Hall, on either side of the main entrance, along Jay Street. My surprise was unpleasant and dispiriting. The trees that had for years given us gorgeous displays of bright pink cherry blossoms were gone. One rather straggly weeping blossom tree did survive, near the main stairway. 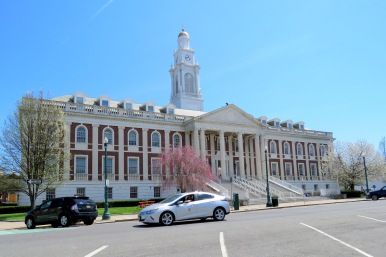 . . along with several indications that something was missing:

At this point, I have not heard any explanation from our consistently benighted City Hall and the McCarthy Administration for the cherry blossom massacre. George Washington could not tell a lie about chopping down a cherry tree. I wonder how the Mayor will respond. As/if any explanations are forthcoming, I will report them in updates at this posting.

From the webpost “in mem. City Hall Cherry Blossoms“, at suns along the Mohawk:

“They were removed so the city could perform our window restoration project,” City Engineer Chris Wallin said. “Under that contract, all of our original windows in the building will be removed, restored and replaced.”

With the help of a consultant, the city determined six trees were located too close to the building to perform the work effectively, prohibiting the installation of equipment and rigging.

The trees were not original to the building’s construction, and were planted in 2005 to commemorate Arbor Day by Re-Tree Schenectady, a non-profit organization that plants trees around the city.

Wallin acknowledged the pleasant springtime vibrancy produced by the trees, but said cherry trees, in particular, require vigilant pruning and maintenance to keep under control, and the city hadn’t always performed the work.

“They started to really obscure the front of the building, which is a historically significant building,” Wallin said.

That wouldn’t happen in front of White House or Executive Mansion in Albany, he said.

A few points in rebuttal and in sorrow:

p.s. Thank you, Gazette, for reporting on this topic and using our photo to illustrate what was lost. 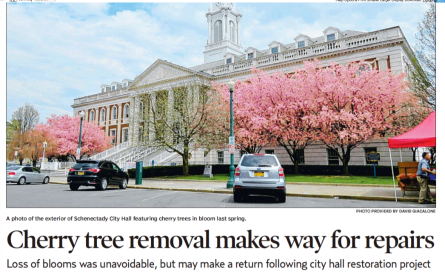