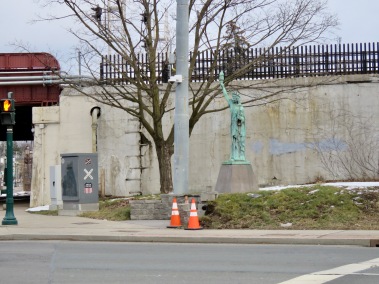 . . and see: “Will civic pride save Schenectady’s liberty replica” (Feb. 11, 2021), comparing our Lady in Exile’s location and condition with the respectful situations in all the other BSA replica towns in Upstate New York.

Our “Smart City” Mayor, Gary R. McCarthy, has made another very unwise decision. Six years after the City Council and Mayor approved the official Gateway Plaza Implementation Plan to return Lady Liberty to Her Original Home; two years after our Lady Liberty replica statue was removed for safe-keeping during the reconstruction of Her Liberty Park; and 17 months after the Mayor was first publicly asked to explain the failure to return the Statue, Mayor McCarthy announced today that the Lady had been placed at her new permanent location: The southeast corner of Erie Boulevard and Union Street, with a railroad overpass and retaining wall, and parking lot as Her backdrop. See Pete DeMola’s Gazette article this afternoon, here [screenshot image]; and a TU article [screenshot image] by Paul Nelson (both online August 28, 2019).

The Mayor’s statement today again gave no reason for not following the approved Implementation Plan for Gateway Plaza, and failed to identify his so-called “design team”, which understandably wants to remain anonymous. As reported in the Times Union:

“Upon completion of the newly redesigned Gateway Plaza and after careful consideration and discussion with our design team, it became clear that we would need to seek a new location for the statue,” Mayor Gary McCarthy said in a statement Wednesday. “This is an extremely high-visibility intersection with approximately 30,000 daily travelers on Erie Boulevard.”

Records have been redacted pursuant to FOIL Public Officers Law Article 6 §87(2)(g)(iii) “Agency records”.  States, an agency may deny access to records or portions thereof that are inter-agency or intra-agency materials which are not final agency policy or determinations. If you would like to appeal your request, you may do so in writing Mayor Gary McCarthy, City Hall 105 Jay Street, Schenectady, NY  12305.  Your written appeal will need to be within 30 days.

.
Of course, nothing requires the redacting of this information. The Mayor has never told us why Lady Liberty needs to be exiled from Liberty Park, and his FOIL office (Corporation Counsel) has decided to hide whatever those reasons and reasoning might be. Somehow, an appeal to the Mayor sounds futile.

.
* At the foot of this posting, I have a few comments and screenshots from the pdf FOIL packet. You will note that none of the “careful consideration and discussion with our design team” mentioned by the Mayor made it into any legible portion of any document (e.g., email, memorandum, phone call memo, etc.).
.

Indeed, this is such a “high visibility” intersection, that several people have already told me they passed right by without seeing Lady Liberty today. I was one of those who did not notice The Lady, as I drove west on Union late this morning heading to the Stockade. Drivers coming west on Union and going straight or turning right will almost certainly fail to see the Statue without an effort to do so. That fat pole itself blocks the view, but so will vehicles turning left and waiting with you for the light to change.

The idea of the beloved green Statue distracting the already driven-to-distraction motorists and pedestrians at that intersection is downright scary. Whether taking the time to look for Lady Liberty, or being surprised by Her in the middle of a turn, or texting a friend that you just saw the Statue, the City’s creation of such a remarkable distraction is exactly what we do not need at Erie Blvd. and Union Street.

It is most certainly not a pedestrian-friendly intersection, as drivers are immediately allowed to start turning when pedestrians get the Walk signal at that long crosswalk. Ironically, just yesterday (Aug. 27), two left-turning vehicles came speeding in front of me, as I tried to cross with the Walk Signal in that very crosswalk. I jumped back and signaled the third driver, in a large black SUV, to stop. She did, but angrily (and ignorantly), yelled at me: “I have a green light!” I hope Lady Liberty is not too squeamish as she gazes out at the intersection. 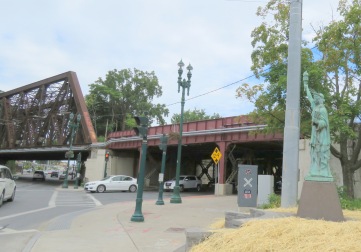 I’ve been trying to keep this posting relatively light, to stifle my great disappointment over the crassness, arrogance, and pettiness of the process that ignored the approved Plan and the public’s preferences, only to result in this disagreeable location for our Statue of the Lady who brings Enlightenment.

Her Real Home. In case you need a reminder, this is where Lady Liberty reigned and inspired for 67 years, before she was moved “for her protection” during reconstruction of Liberty Park; photos taken September 2016: 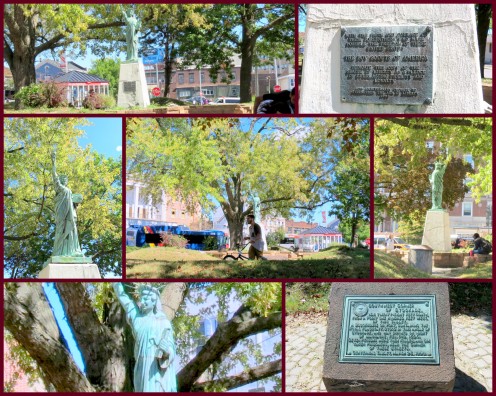 Beyond the Mayor, the irresponsible and/or cowardly posture of City Council members other than Vince Riggi on this issue makes very little sense politically, but should be a big concern in a City that is about to “celebrate” four more years of Mayor Gary McCarthy. I hope the electorate will have some serious questions for those seeking reelection this year (Kosiur, Polemeni, Perazzo), about their independence from the Mayor, and their commitment to transparency and integrity. 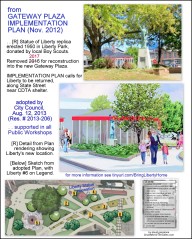 THE SORRY TALE of the EXILED LADY.  If you look down the Right Margin on our Homepage, you will see many postings concerned with Lady Liberty, Liberty Park and Gateway Plaza, that are part of this too-long story. A good place to find important images and documents and coverage of the tale, including links to additional webposts, is the posting “Lady Liberty is Timeless.” To the immediate right is a thumbnail of an Advocacy Poster I presented in March of 2018 that helps explain why we felt betrayed. 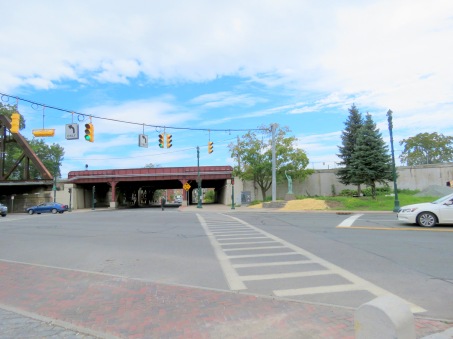 . . Above and Below: a very wide intersection for a small statue and Big Symbol . .

BTW: Below is my view of Lady Liberty from the front of the line, waiting in my car for the light to change, heading west on Union Street; I had to roll up a foot or two to see Her at all (taken Saturday, Aug. 31, 2019):

follow-up (April 1, 2020): Seven months after Lady Liberty was planted at Her location-in-exile, it seems there have been no attempts to spruce up her seedy surroundings. On the 1st of April, 2020, I stopped by on my daily walk, and saw the following unmitigated, still-rusting eyesore, about 10 yards behind the Statue: 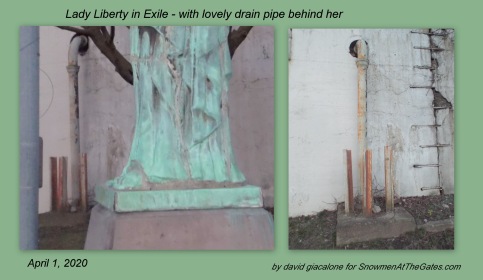 And see The Lady in the Dark, Not in Her Park. 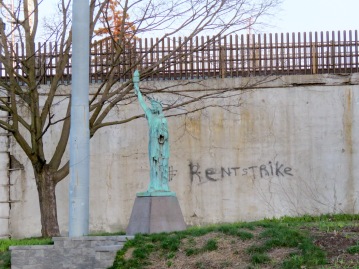 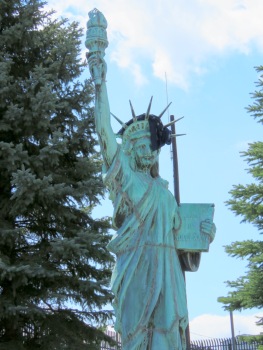 follow-up (Sept. 10, 2019): Meanwhile, City Council President Ed Kosiur told me after the Council meeting on September 9, 2019, that he only learned about the new location when I posted about it at my website. Kosiur also said, as an excuse for not demanding the Mayor return Lady Liberty to Liberty Park, that its return was never actually mentioned in the Plan, but was shown only in images. I assured Ed he was wrong, and wondered who gave him that misinformation (got no answer). He asked that I show him treatment of Lady Liberty in the Gateway Plaza Plan. Back at home that evening, in response to Ed’s request, I looked through the Implementation Plan to find proof that the return of Lady Liberty was indeed included explicitly in the Plan (and not merely shown in a rendition or on the cover). Click on the thumbnail of a portion of p. 37 to the right above. I also and sent Ed several other screen shots from the Plan.

Mr. Kosiur never responded to nor even acknowledged the September 9th email, nor a reminder email that included the same information, sent September 22, 2019.

*Click here for the FOIL packet re the Location of Lady Liberty. Here’s what I learned from the FOIL Packet: 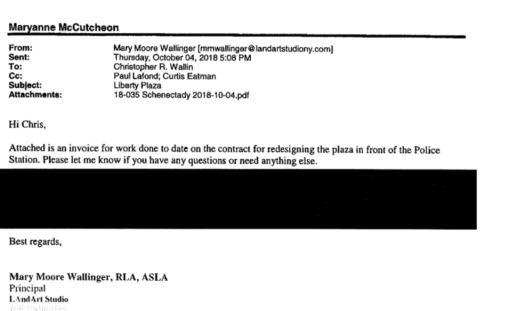 My summary reaction to the FOIL Return: [Expletive-less Version] Sigh. What ever happened to integrity and transparency and trust in our Government? Does Mary Moore Wallinger not care about her reputation for honesty, sincerity, and good judgment? What does she have over the Mayor that causes him to squander his already-limited credibility in order to accomplish her wish to exile Lady Liberty from Liberty Park? Is it merely her always-lenient view of projects favored by the Mayor and Metroplex?