. . Her Sisters are All Treated Better

The photo at the top of this post was taken on January 19, 2021. The scene remains the same three weeks later, as I prepare this posting. It’s been about a year and a half since Mayor Gary McCarthy, prompted by  Planning Commission Chair Mary Moore Wallinger, exiled Schenectady’s BSA Liberty replica from Her home of 67 years to this dismal site, rather than returning The Lady to Gateway-Liberty Plaza, as promised. The site still has no marker nor plaque identifying the statue or its source. I walk or drive by almost daily, and have never seen another human being visiting the Statue, except for a man sleeping on the retainer wall once. It took nagging by me to get the City to do something about the damage done to that wall by a snow plow just before Christmas. As you can see, the “something” was to gather and pile up the blocks that had been knocked onto the sidewalk, and place three safety cones.

Rather than merely assume that no other city or town treats its BSA Statue of Liberty replica so shabbily 70 years after they were erected, I searched online for images of the 100+ extant statues. I discovered two compilations of BSA Liberty Replica images, and found (1) photos of 117 of the replicas at http://passbagger.org/statue-of-liberty.htm [many thanks to all the participants who visited on their motorcycles and gathered the images]; and (2) an archived page of Replica thumbnail shots compiled by BSA Troop 101 of Cheyenne, Wyoming. The original post by Troop 101 linked each thumbnail to a full photo, but only the thumbnails remain in the archive. The top of that webpage can be seen in the image to the right of this paragraph; and immediately below is a screen-shot of the bottom of that page, from web.archive.org. 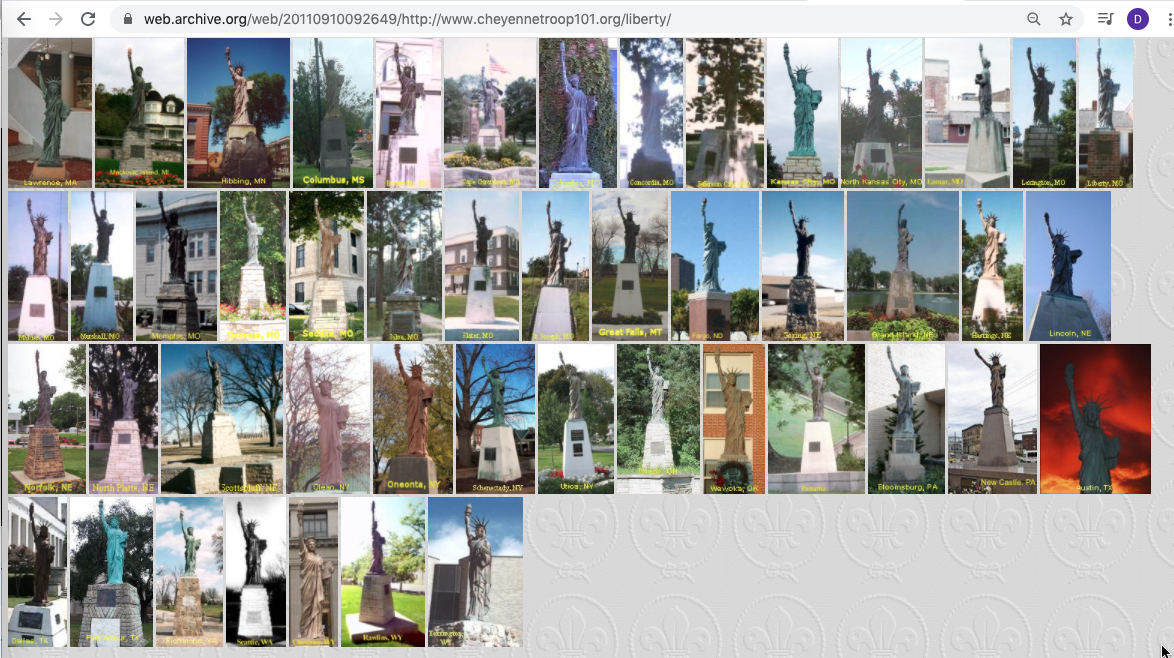 In my opinion as a citizen and prolific photographer of public places, every single BSA Liberty Replica in the nation stands on a far more appropriate and attractive spot. You can draw your own conclusions by browsing through the PassBagger collection., which offers fuller images of each site. Rather than being accused of cherry-picking the best examples from around the country, I have decided to present here images of every one of the Liberty Replica statues in New York State that were placed as part of the 1950 Boy Scouts of America 40th Anniversary project, “Strengthen the Arm of Liberty”.

BSA Liberty Replicas stand in six Upstate communities. In alphabetical order: LeRoy, Niagara Falls, Olean, Oleonta, Schenectady, and Utica. Schenectady’s Lady Liberty was placed in storage in 2017, to be left for two years without being cleaned or repaired prior to being unceremoniously exiled to its current location. In contrast, at about that time, two of the communities, LeRoy and Utica, raised the funds and donated services to have their Liberty Statues and bases totally refurbished. 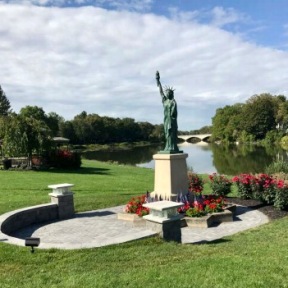 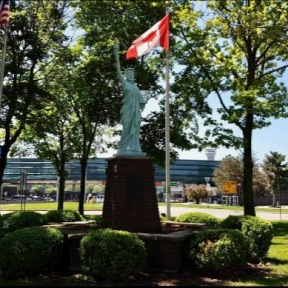 It’s difficult to read what the Village of LeRoy (pop. under 8,000) did to honor and save its replica of Lady Liberty without being embarrassed for Schenectady and its Mayor. Click on the thumbnail at the head of this paragraph, or the following link, to read “Leroy to be Recognized” (LeRoy Pennysaver, October 22, 2017, by Lynne Belluscio, Director of The LeRoy Historical Society.) Led by their Historical Society, the people, companies and organizations of LeRoy contributed over $15,000 and many services to “save” their Lady Liberty. See also, The Batavian (March 7, 2016); and Rochester Democrat & Chronicle (July 2, 2016).

Here are other views of Upstate NY BSA Liberty Replicas:

. . in Olean (in front of new wing of Senior Center)

Will Civic Pride (or Shame) Help Lady Liberty? Schenectady’s City Council approved the Comprehensive Gateway Plaza Plan in 2013, which included the return of our Liberty Replica to the newly configured Plaza once construction was complete. Mayor McCarthy signed the resolution adopting that Plan. Mary Wallinger was the primary author of The Plan, with its call for the return of Lady Liberty, which was designated an Official Document of the City of Schenectady. Neither McCarthy nor Wallinger ever explained to Council or the public why the Liberty Replica was sent away. To date, despite the popularity of the Liberty Park location, City Council has not had the courage to demand that Mayor McCarthy obey the resolution they passed and the Mayor signed in 2013, and return Lady Liberty to Gateway Plaza, which incorporates the statue’s original home, Liberty Park.

Not only did the Comprehensive Plan include a $20,000 line item to pay for the return of Lady Liberty. It also placed a still-empty central sculpture base at virtually the same spot where Lady Liberty stood until August 2017. Last year, Mayor McCarthy did not even respond to two messages from a neighborhood leader offering to move the Replica to this sculpture base at no cost to the City. The photo immediately above and the one below this paragraph depict that ready-for-the-Lady sculpture base, with its seating and space for visitors.

Unlike the Lady’s Location in Exile, the Plaza’s sculpture base is fully lighted at night. Here’s what they looked like just after sunset on March 20, 2020 (Liberty on the left, the Plaza on the right):

Over the past few years, arguments based on honest government and transparency, respect for public opinion, local history, and the values Lady Liberty embodies, and even basic aesthetics in our so-called Renaissance (and Smart) City, have all failed to move Mayor Gary McCarthy to return Schenectady’s Lady Liberty replica to its Home Park. I’m hoping that this presentation comparing the fate of Schenectady’s Lady Liberty with the respect Her Sister receive in other upstate communities, will hit the mark and let Civic Pride inspire a change of heart on the part of Mayor McCarthy, and change of location for Lady Liberty.

BTW: See our posting “Inspired group of immigrants honor Lady Liberty in Amsterdam, NY“.Just 15 or 16 miles away in Amsterdam, NY, a group of Chinese immigrants commissioned a new Liberty replica to replace one too damaged to repair. It was dedicated in May 2019, just a few months before our Replica was dumped along Erie Boulevard. The statue is not part of the BSA program, but was meant to honor all that Liberty represents. Whether the gesture was because of or despite a wave of distrust and negativity from some segmants of the Amsterdam community I do not know. The posting linked above has many images of the new Liberty statue and its environs, which sits in “Health, Peace and Frienship Square”, across Main Street from two of its major properties.