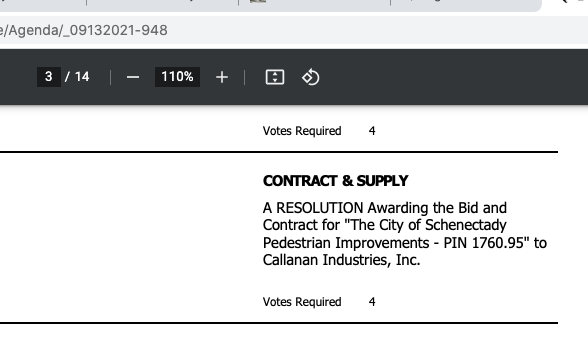 I was surprised to see this item on the September 13, 2021 City Council Agenda. If the Council is approving a bid and contract for the pedestrian safety project, I speculated, the Schenectady Pedestrian Safety Action Plan must have been finalized. I had not heard anything about it since City Engineer Chris Wallin held an online Public Informational Meeting on January 19, 2021, seeking public input and soliciting written comments. [video of the Meeting] I submitted Comments on February 1st (Part 1; Part 2).

I asked Chris Wallin for a copy of the final plan, and he sent it to me on September 24th. Click on the image to the right to see the cover of the Contract Plan (Drawings & Notes), which has the date of July 2021, and a map of the eight affected intersections. I have not gone through every page of the Final Pedestrian Safety Action Plan, but concentrated on recommendations that I had made or that involve the Stockade. My impression, nonetheless, as with virtually every City proposal made to the public for many years, is that no significant change has been made to the original proposal.

Here are other, selective problems that I see with the Final Pedestrian Safety Action Plan:

Erie & Union Intersection NOT Included. During the Jan. 19 presentation, both Suzy Unger, Stockade Association President, and Daniel Carlson noted their surprise that the intersection of Erie Boulevard and Union Street is not included in the $1.1 million project. I agreed with Unger and Carlson in my Comments (Part 1), as did Stockade resident Gloria Kishton, that Erie-Union is far too dangerous for pedestrians to be omitted from the Plan, and the fact that it was improved several years ago is no excuse to ignore it now. I wrote:

In my experience, it is deemed the scariest intersection downtown by most people living, working, shopping, or visiting in the Stockade.

The biggest problem is that turning vehicles do not yield to pedestrians in the crosswalks, even when they are crossing with the pedestrian walk signal. I concluded:

SUGGESTIONS: For the lengthy crosswalks at this intersection to be safely navigated on foot (or in wheelchairs and similar devices) there must be a leading pedestrian interval (LPI) to give pedestrians an advance walk signal before the motorists get a green light [and wrongly insist they are entitled to turn despite pedestrians]. Or, as at State and Erie, all lights should remain red and no turns allowed during the walk signal cycle. Signs declaring “Yield to Pedestrians in the Crosswalk” would also help.

Those recommendations were not taken, and no changes have been made since January at the intersection outside the framework of the state-funded Action Plan. 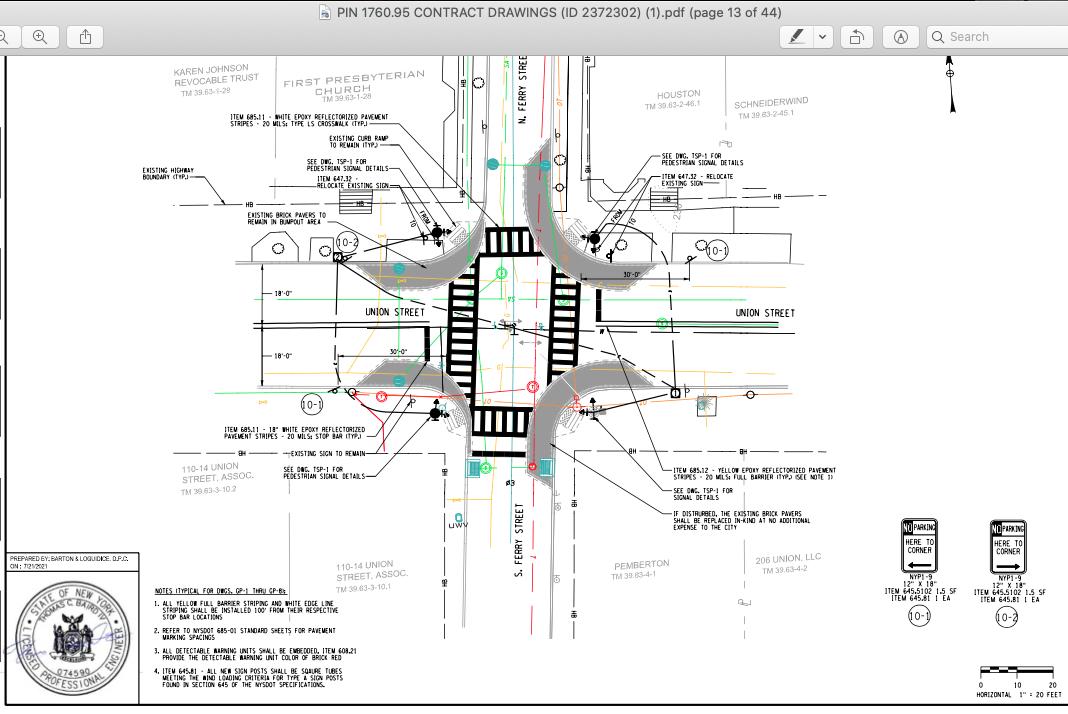 Ferry St. at Union Street will continue to have signal lights, not stop signs. The final configuration at this Stockade intersection appears to be the same as in the proposal. The Engineer’s office did not take Suzy Unger’s recommendation that there be stop signs rather than traffic lights at the intersection. Suzy, who lives on that block of Union Street, believes that drivers speed up on that lengthy segment of Union Street in order to make the green light. Stop signs would require all vehicles to stop, every time, reducing speed and increasing safety. [Click here for a larger version of the notes at the bottom of the above Plan page.]

Union Street at N. Broadway was not added to the project. In Part 1 of my Comments, I also suggested that N. Broadway at Union Street (images above and below this paragraph), next to the Centre Street Pub, be included in the Action Plan. My frequent attempts to safely use the crosswalk at this corner have made me aware of the hazards. Because they are turning onto a one-way street, and expecting no oncoming traffic, and may be trying to beat a red light, the traffic turning south from Union Street onto N. Broadway is often speeding. Moreover, due to poles and a large utility box, drivers coming east from Erie Blvd. and the train underpass can have a very difficult time seeing pedestrians, while the pedestrians have their back to that traffic and have the same obstacles blocking their view if the do check behind them. In addition, just past the crosswalk on N. Broadway, there are often persons crossing the narrow street going to or coming from the Centre Street Pub or another pub on that block. 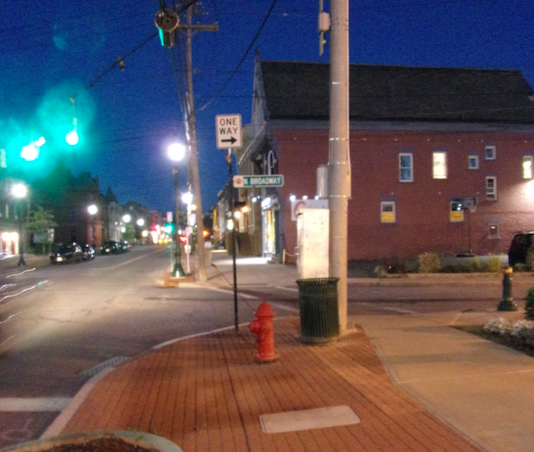 This intersection could be made much safer for pedestrians rather easily (and cheaply). The large utility box and trash receptacle could be located better (e.g., raising the utility box seems quite workable). And, signs warning of crossing pedestrians would also help.

. . . typical design and element requirements for the “bump-outs” in Schenectady Plan. .

I’ve been arguing, since expensive brick pavers were installed at four Union Street Stockade Intersections in July 2020, that without having curbs along the outer borders (or at least bollards) these misnamed “bumpouts” can have none of the hoped for traffic calming and pedestrian safety benefits associated with true bumpouts.  True bumpouts extend the sidewalk and curb (bump them out) into the roadway, effectively narrowing the street at that location, shortening the crosswalk distance for pedestrians, forcing wider turns, and preventing parking at and near the corner (to open driver and pedestrians sight lines). See the posting “our curb-less curb extensions” (July 24, 2020), which has many images, discussion and explanation, with text from and links to relevant materials.

For almost a year and a half, I’ve asked Stockade Association leaders (who had requested true bump-outs with curbs, see image above, but accepted the curbless versions that were installed), and City Engineer Wallin how the flush-with-the-pavement “corner tattoos” [Editor’s phrase], in any way increase safety. No one has suggested to me likely or even potential safety benefits — not even with tongue in cheek.

Nevertheless, I will offer one tiny potential benefit of the current design: Unlike with the  Stockade version, no genuine bricks are being used for the pavers. Instead, they will be embedded “surface applied thermoplastic.” That surface may be more skid resistant than bricks. I am not sure if they would be better than customary road surface pavement. And, pedestrians should be on the sidewalk or using the actual improved crosswalk, not standing on the new red surface.

Mr. Wallin spoke correctly at the Information Meeting when he said “I wouldn’t say bump-out” when describing the Stockade pavers at Union and Ferry Streets. This collage shows the “improved” Stockade corners with their brick pavers. Consider for yourself whether or how-ever they might increase pedestrian safety.

My conclusion in July 2020 was that “No Standing Here to Corner” signs would have been far more effective and far less expensive. The City did eventually put up such signs, and we can attribute pedestrians and drivers being able to better see each other to the signs, not the red bricks. Even with the No Standing signs, delivery vehicles regularly park on the flush pavers when needing an open space.

Moreover, at the Information Meeting, Mr. Wallin offered the rationale that curbless works better for maintenance and operations, but hat does not justify the expense in the name of pedestrian safety. Moreover, as shown in my web posting, there are true bump-outs in many places in the City (e.g., Union at Dean, on the Proctors Block), and plow drivers and other operations staff appear to be able to handle them very well.

Finally, are we supposed use the State safety dollars just to make interesting red pavement at the downtown intersections? Surely the dollars could be better spent for safer streets for pedestrians. The novelty of the red embedded brick pattern will not only quickly fade, but so will its coloration, given our winter weather and the many large vehicles that will drive over the new patterns as they cut tight corners or strain to navigate a corner.

BTW: I have asked Mr. Wallin if I could see bid sections showing what the “bumpouts” will cost, but have not had a reply. Perhaps the media or City Council members could look into this clear waste of State funds granted to help make Downtown Schenectady safer and thus more walkable.