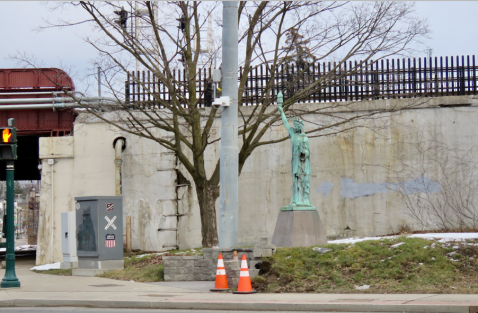 For 67 years, our Schenectady community honored and respected the Lady Liberty replica that graced the Park named for the statue, Liberty Park. In August 2017, the Statue was removed from Liberty Park for its protection while the Park was being expanded into a new Gateway Plaza. We all thought the Lady would be kept safe and returned to Her Home (fully refurbished) when Plaza construction was complete. That is what the public wanted and the Mayor and City Council promised when they approved the Comprehensive Plan for Gateway Plaza in April 2013.

Instead, backroom decisions were made, by Mayor Gary R. McCarthy, with no input from the Council or public, to exile Lady Liberty from Her Park. When the public clamored for the return of Lady Liberty from storage in a City warehouse, City Council did nothing and the Mayor stalled for more than a year, before dumping the Replica unrepaired at a most inappropriate location: The northeast corner of Union Street and Erie Boulevard, amidst eyesores, and with no signage, landscaping, foot-traffic, or lighting. 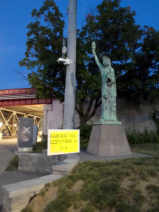 . . WE MUST FINALLY END THIS SHAMEFUL DISRESPECT FOR LADY LIBERTY, PUBLIC OPINION, and OUR PLANNING PROCESS .

This goal should be easy to accomplish. The best location for Lady Liberty is available right now, almost exactly where She stood for 67 years, at the new and unfilled central sculpture base at Liberty/Gateway Plaza (image to right). It has visibility, seating, space for visitors, lighting, and more. The choice fulfills the promise made by City Council and the Mayor in 2013. And, it overlooks a modern symbol of the civil liberties Lady Liberty has inspired, the Rainbow Pride monumnent. Images below are from January 2021:

This website has a lot of information about this very avoidable controversy (see the Gateway-Liberty Park category), but the important issues can be grasped by checking out the links provided below this paragraph . This photo-editorial was presented to Council and Mayor in March 2018 (click on it for a larger version): 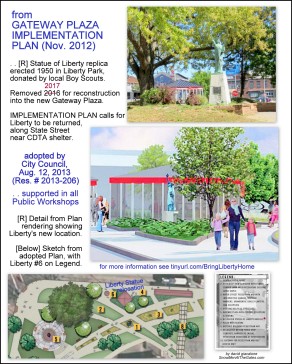 BTW: Mary Wallinger, the chief designer of Gateway Plaza and drafter of the Plan, changed her public position about returning Lady Liberty to Liberty Park, and placed the Rainbow Pride public art project at the location designated in the Plaza Plan for the Liberty replica. Happily, as stated above, there is an even better location still available close to the original installation. It more closely reflects public comment during the Plaza planning process.

Here are links to various topics of interest. Each posting contains more links to relevant material.

See “Letters for the Lady” for a compilation of letters to the editor and editorial pieces about the City’s treatment of Lady Liberty.

Come back for updates related to the Rally and our Lady Liberty Respect campaign.

(October 24, 2021): The Sunday Gazette has an article about our campaign to return Lady Liberty to Her Home. See “Schenectady group wants Lady Liberty off Erie. Blvd., back to former park location” (Brian Lee, A1; photo at right).

(October 25, 2021): Our thanks go to NewsChannel10 reporter Collan Smith (on left) for highlighting our campaign in their Sunday night news program. See “Schenectady group wants lady liberty statue moved ‘out of exile‘ (October 24, 2021).

(October 26, 2021): Today’s Gazette mentions our Bring Her Home campaign at the end of an article that focused on City Council passing the Annual Budget at its meeting last night.

In another matter, a procession of residents asked McCarthy to return a replica of the Statue of Liberty to its former long-time location in Liberty Park, now known as Gateway Plaza.
.
The statue, which arrived in Schenectady in 1950 by way of a Boy Scouts fundraising effort, was moved to the corner of Erie Boulevard and Union Street in 2019 after a redesign of the park began in 2017.
.
Chris Morris, director of the advocacy group Schenectady Landlords Influencing Change, likened Lady Liberty to a “special tenant” and McCarthy to  “landlord” who had uprooted her to just below train tracks on “one of the busiest and inappropriate street corners” in the city.
.
“What an absolute disservice and disrespect to such a well-loved member of our community seeking peace and tranquility,” Morris said.
.

Unfortunately, the report ended with this sentence:

McCarthy has said that the statue had been neglected and was often urinated on at its former location.

By repeating the Urination Excuse (twice in three days), the Gazette enables the Mayor’s habit of giving nonsense replies to questions about his actions. One reason Liberty Park was reconstructed was because its overgrowth of vegetation allowed homeless people to spend time there sleeping and drinking and doing drugs. Opening up the Park makes it much harder for such activity to continue. The Mayor did not violate the Comprehensive Plan he signed in 2013 because of prior urination. And, he certainly did not choose the disrespectful Location in Exile because of prior urination.
David Giacalone’s presentation from the floor at the Oct. 25 Council Meeting was titled “Civic Pride and Lady Liberty” (click for the pdf file).

GALLERY for THE LADY: This space will present a growing collection of images of Lady Liberty advocates from our Schenectady Community:

. .  also at the Sunday Green Market on Jay Street: