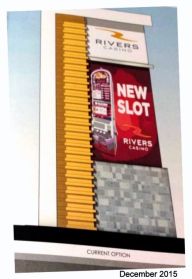 According to an article in the Albany Times Union by Paul Nelson, “Casino sign plan to be submitted to city in ’16” (Dec. 13, 2015), a new design for the pylon sign will soon be unveiled:

As it stands now, the pylon sign is generally framed on two sides by a contiguous white vertical and horizontal band and does not feature any glass, as was previously discussed. It’s unclear if that white band will be lit.

The rendition to the right was included with the TU article, and was apparently provided by Rush Street Gaming design consultant Mike Levin.

Levin said the Planning Commission already approved the height of the sign, which complies with city code, and that will not change.

Stockade resident David Giacalone, who has spoken out against the casino project, said a relatively inexpensive computer-generated visual impact analysis by an independent organization would help allay anxieties some people have about the brightness of the pylon sign on nearby residential neighborhoods.

For much more on the pylon, see our Pylon Sign Directory