You have probably seen or heard the newspaper and digital advertising blitz and all the media coverage the past couple of weeks for the 1st Anniversary of Rivers Casino at Mohawk Harbor in Schenectady. [click on image to the right for a sample] The Anniversary occurred on February 8, and is being celebrated at the Casino throughout February, with drawings for free cars, special entertainment, and more. Yesterday afternoon (Friday, Feb. 16), I checked the NYS Gaming Commission website to see if promotions for last week’s big Anniversary-cum-weekend have meant better gaming revenues for Rivers for the week ending February 11. After its disappointing shortfall from projected GRR in its first full year, the ability to create some Anniversary excitement might suggest whether our municipal leaders are correct about the coming of a better year.

The total Gross Gaming Revenue for the week ending last Sunday was $3,232,728. That makes Anniversary Week the 5th best week since the opening of Rivers Casino. Naturally, its owner-management, Rush Street Gaming, will say they are delighted with that figure, even after considering all the promotional and entertainment expenses. To me, the results seem rather “so-so” [“mezza mezza”] as Celebrations of a treasured community asset go. Underwhelming. [update (Feb. 23, 2018): GGR for the next Anniversary week, ending 02/18/2018, went down slightly, amounting to $3,221,484, making it Rivers’ 6th best week in Schenectady.]

To put a $3.2 million Anniversary Week into perspective:

Was It the Weather? Rush Street Gaming can’t blame weather for its Anniversary Week results. It was a normal-moderate Schenectady early February week, with one snowfall of 7 inches starting on February 7, but streets cleared by early on the 8th, and moderate weather through the weekend. 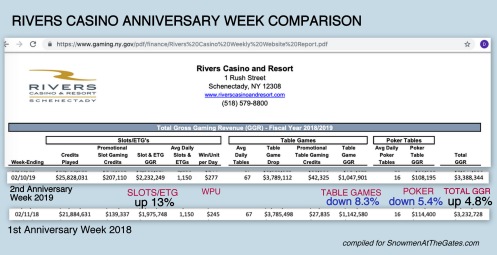 Meanwhile, how did the new competition in the Catskills — Resorts World Catskill in Monticello,  NY — do in its “soft” opening week? RWCatskills had an early, soft opening on February 8, to prepare for this weekend’s celebration of Chinese New Year, with its hopeful influx of high-rollers from the other Far East. According it its NYS Gaming Commission Financial Report: the total for its 4-day first week was $3,403,955. Over its first 53 weeks, Rivers Casino in Schenectady has had only 4 weeks better than RWCatskills’ first, four-day week.

If you’d like to see why many observers say that the new Catskills Casino has a “wow factor”, including a 19-story hotel that serves as a palette that reflects its changing surroundings, that sets it apart from Schenectady’s casino, check out RecordOnline.com’s “Exclusive behind the scenes video tour of Resorts World Catskills” (Feb. 6, 2018, 8 min.).