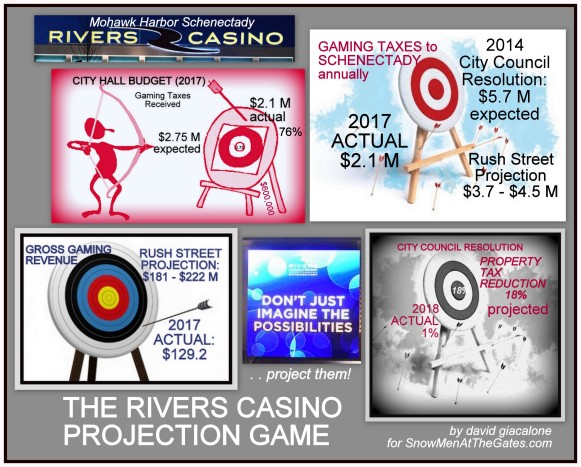 Year-end numbers are in for 2017, and the City of Schenectady has received approximately $2.1 million in gaming tax revenue as the Host City of Rivers Casino at Mohawk Harbor, based on the Casino’s Gross Gaming Revenue total of $129.2 million for the year. The County received the same amount. In its budget, the City had projected it would receive $2.75 million from distribution of gaming taxes in 2017, leaving a shortfall over $600,000. See “Schenectady loses bet on casino revenue” (Times Union, by Paul Nelson, Jan. 4, 2018). As the Gazette pointed out last November, “Rivers reportedly projected its first-year [Gross Gaming] revenue to be in the $181 million to $222 million range.” If we take the middle of that range, $201 million in GGR in its first year, Rivers Casino only achieved 64% of its first year projection.

In what is surely a causally related effect, Mayor Gary McCarthy stated for the first time, in his New Year address before City Council last week, that he expected the City would have a “small deficit” when all 2017 numbers were tallied for the City, giving no further details of the cause or the likely amount. Asked afterwards, new City Council President Ed Kosiur said the Mayor’s remarks were the first he heard of a deficit. See “Schenectady Casino Revenue Coming Up Short of Expectations” (Samantha Beckett, Casino.org, Jan. 5, 2018). Regarding the Upstate casino shortfall in general, see “He nailed it: An analyst’s 2014 report predicted Upstate New York casino woes” NYUp.com, by Don Cazentre, Jan. 18, 2018).

Click on the image to the left to see a week-by-week display of Gaming Revenues generated at Rivers Casino in 2017, plus totals.

The Stabilization Hope. Our City and County leaders keeping saying we can expect much better results once the casino’s operations and revenues have stabilized — as if Rush Street and its expert analysts are not competent to make first-year projections. But, in its Application to the Location Board, Rush Street Gaming estimated stabilized revenues in Year 5 to be only 10% more than its Year 1 figures. For more information on Rush Street’s revenue and tax projections, see the Applicants’ Economic Impact Analysis.

Remembering the 18% property tax reduction City Council claimed it expected in a Resolution passed just before its vote to approve the Casino Application in July 2014, many residents are unhappy with the 1% reduction in the current City budget, and many are “roiled” over the water and sewer fee increases announced this week, which will offset the 1% reduction. See “State, local promises before casino vote a bust” (Times Union, by Lauren Stanforth, December 17, 2017); “Water, sewer rate increases roil some Schenectady residents” (Times Union, by Paul Nelson, Jan. 5, 2018).

Are things likely to get better? Despite their Happy Faces, the City Council budgeted only $2.3 million in casino tax payments in 2018. Furthermore, Rush Street, City Hall and Metroplex have all pointed out for months that revenues are likely to rise due to the opening of Rivers Casino’s Landing Hotel, which had its first guests on July 19, 2017. (e.g., Times Union coverage; Gazette coverage) The week ending July 30 was the first full week with the Landing open. Despite the predictions of our Casino Cheerleaders, my calculations show that:

And, did you say “Resorts World Catskills Casino”?

[Follow-up Note, January 2019: So far, Resorts World Catskill Casino has been limping along, and promising to do better once all of its gigantic investments are in place to make it a destination location. Also, with its primary customer base quite close to home, it seems unlikely that Rivers Casino is looking for the same kinds of gamblers as is Resorts World Catskill]

Perhaps more worrisome for Rivers Casino is the imminent opening of the $1 billion Resorts World Catskills Casino in Monticello. See “New Catskills casino brings glimmer of hope” (Gazette, by Charles Bagli, originally in the New York Times, Jan. 12, 2017); and “Huge new indoor water park and hotel coming to Resorts World Catskills in 2019“, NY Upstate Amusement Parks (Jan. 16, 2018). As the NYT article states, “It is by far the largest and most luxurious of the four new casinos licensed under Gov. Andrew M. Cuomo’s gambling expansion.” And, it is reaching out to international gaming tourists, as well as the New York City market area.

This is destination gambling, different from most of the other New York casinos, which are designed to be convenient to gamblers within a 50-mile radius.

“It’s intended to be an integrated resort,” said Ryan Eller, chief executive of Empire Resorts, which owns the casino, as he conducted a tour of the property. “Not only one of the most luxurious options on the East Coast, but one that addresses a wider range of customers with golf, dining, entertainment and a family option.”

The opening of the Catskills Resorts World Casino on February 8 can only underscore just how mediocre our supposedly “destination” Rivers Casino is, and how little Schenectady has to offer people outside our immediate area. This site’s posting from last January, “casino choices in upstate New York: who will choose Schenectady?” is not optimistic that we can successfully attract people from outside a very small geographic area, given the many other casinos that actually appear to be true tourist destinations. Our City Hall keeps exclaiming that we are now a destination, Renaissance City. Sadly, to most people who have spent any time in true tourist cities, we would look like more like a Rent-a-Center City, if they somehow were to give us one chance by visiting Mohawk Harbor.

After overestimating Schenectady’s ability to attract tourists, our leaders compounded their mistakes by asking far too little of Rush Street and Galesi Group. As a result, we not only got their architectural scraps, we failed to demand the sort of guarantees any self-respecting City would require of a casino applicant (see, e.g., Rush Street’s Giveaways; and “the Mayor and the Lago HCA“).. And, especially with its new General Manager’s experience selling a casino for Rush Street, we may soon learn “what comes after a rush.”

p.s. Our City’s subservience and give-aways to Rush Street and Mr. Galesi continue. Rush Street gave Illinois an extra $3 million to fund a nearby interstate highway exchange. But, in Schenectady, Mohawk Harbor not only paid nothing for the Rotary at Erie Boulevard, but our civic leaders are struggling to find money to build a $2.4 million, 1000-foot public dock on the Mohawk along Mohawk Harbor, without asking its biggest beneficiary for a contribution. UPDATE (July 27, 2018): see our July 24 posting “The Large Vessel Dock at Mohawk Harbor.”