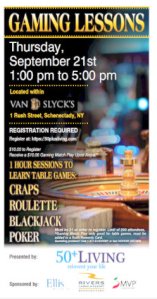 Despite sponsoring Gaming Lessons last September (see image to right), and having a rather good Table Games month in October 2018, Rivers Casino at Mohawk Harbor has still taken in less revenue from Table Games in the nine months since its first anniversary in February 2018, than it did in the same months of 2017, after its opening.  This is, of course, the flip side of the “slotsification” trend we have been reporting on here the past several months: The almost 11% increase in revenues at Rivers Casino over the same period last year is totally accounted for by an increase in Slots/ETG revenue of over 18%, with both table games and poker table revenue down. [Click for the Rivers’ Weekly Gross Gaming Revenue (GGR) figures submitted to the Gaming Commission.] Here’s a chart showing aggregate numbers for the first nine months of operation of Rivers Casino in Schenectady, which began in February 2017, alongside the figures for the same nine months in 2018:

We Repeat our Main Concern: Slots are the most addictive form of casino gambling, and draw many of the most vulnerable members of our community. As disappointing as the measly 1% reduction in property tax rates may be for 2019 (see Times Union article dated Oct. 26, 2018), the budget antics that brought any decrease at all due to Casino gaming tax revenues, are primarily bought with the Slots dollars spent by our grandmothers and neighbors who probably can least afford to gamble at Rivers Casino. The High Rollers are not flying in regularly to help reduce your taxes.

Slots have been up elsewhere across the nation, but at nowhere near the percentage increase that we have seen all year along the Mohawk. Despite that, neither the City nor County of Schenectady has budgeted any funds for problem gambling education and prevention in 2019.  And, neither government seems to want to look into, much less talk about, the dollars sucked out of other local businesses as crowds are lured to events at Mohawk Harbor.