At tonight’s Schenectady City Council meeting, Nov. 13, I hope (despite the unrealistic 3-minute rule) to present and explain the issues depicted in collages posted below. The first topic is related to the Agenda Item regarding approval of a Schenectady PRIDE art installation at Gateway/Liberty Park.  Schenectady needs an established procedure to ensure adequate public input and post-approval monitoring of plans for proposals regarding important public spaces and art. The second will be a Privilege of the Floor statement regarding important safety issues created along the Mohawk Harbor’s shared use path by the failure to follow rules, plans, and best practices when installing a guardrail on the riverside and a set of interpretive signs on the Casino side.

FIRST: “PLANS CHANGE”. For fuller discussion of the question of how [or how not] to include the public in the selection of public art and in the design and implementation of plans for important projects and locations, see:

follow-up (November 24, 2018): The Daily Gazette reports “Stockade Association board asks for more public input on projects: The board detailed this in a letter given to the mayor and city council members” (by Andrew Beam, Nov. 23, 2018). Commentary can be found at the end of this posting.

SECOND: The bike-pedestrian Trail at Mohawk Harbor is far less safe than it readily could have been because of a failure to follow rules, plans, and best practices when installing a guardrail on the riverside and a set of interpretive signs on the Casino side. For comprehensive discussion of ALCO Heritage or Mohawk Harbor Trail safety issues, with excerpts from and links to relevant rules and studies, and with many more photos, etc., see: 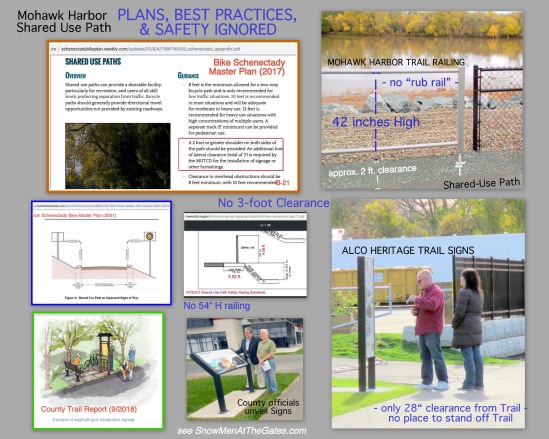 update (Nov. 24, 2018): As stated above, the Gazette published an article today by Andrew Beam headlined “Stockade Association board asks for more public input on projects” (Nov. 23, 2018).  In a lengthy comment left at the article’s online webpage, I made several points, including:

The Gazette, to my knowledge, has not yet published images of the proposed Schenectady Pride installation, designed by Mary Wallinger at her LAndArt Studio. Here are two “renderings” supplied by Schenectady Pride and Ms. Wallinger to City Council and the Schenectady Foundation Community Challenge program:

In my opinion, Schenectady PRIDE and the 50th Anniversary of the Stonewall Uprising deserve a much better design.