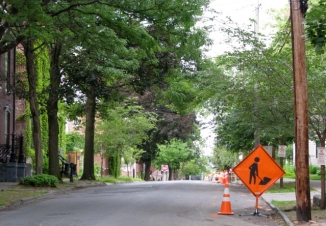 As discussed below, the City of Schenectady plans to remove the large Washington Avenue trees that are pictured in this posting, while repaving the street and repairing the sidewalks this Spring or Summer (only the new, small, decorative trees would be left).

Click on a photo for a larger version and scroll over it for a description. 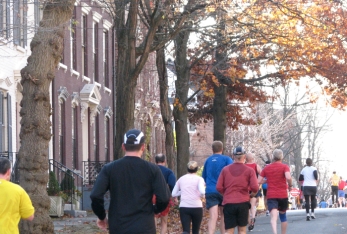 – scene on Washington Ave. showing endangered trees during the 2009 Stockade-athon – 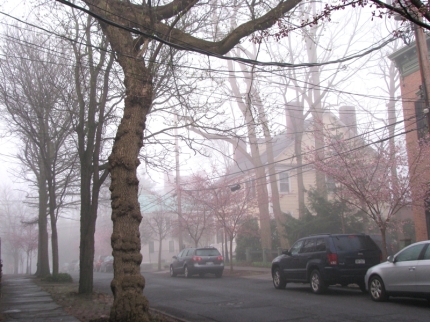 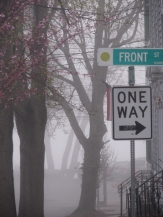 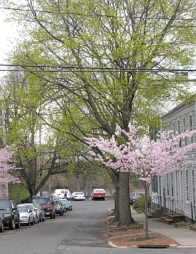 update: (April 15, 2010): Early this afternoon, I filed a Freedom of Information Request [FOIL], supplemented with a second Request around 4 PM, at City Hall concerning the repaving and repair of the street and sidewalks of Washington Ave. Go below the fold at the end of this posting for the wording of the FOIL request and the City’s response.

About ten days ago, at a meeting of Washington Avenue owners and residents with the City’s chief engineer, I first learned that the City of Schenectady’s engineering department was planning to remove all large trees located between the sidewalk and curb on Washington Avenue, as part of a project to repave the street and repair the sidewalks.  The trees would come down whether they were healthy or not, despite the condition of the adjoining sidewalk, as all sidewalks would be taken up and replaced regardless of their condition.   Short of fire-bombing or similar criminal or terrorist acts, nothing more drastic could be done to alter the beauty and ambiance of any neighborhood than taking down its shade trees, especially where there are sufficient trees to form a canopy over the street.  It seems especially irresponsible to perpetrate such urban deforestation in an historic district that has special protection against any change in the appearance of its streetscape. 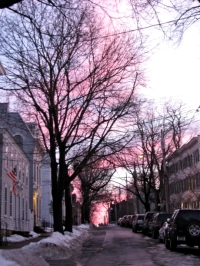 Stockadians and lovers of the neighborhood, please pause to consider what has already happened on No. Ferry Street (for sample photos click).  Now, keep in mind that the City plans to go block by block throughout the Stockade with this paving and repairing project.  We need to change the policy before more trees are needlessly removed.

Also, note: The current plan of the Engineering Department is to remove all sidewalks, to be replaced with either tinted concrete or — at he homeowner’s request and expense — the anemic bluestone that can be seen on No. Ferry St. (at the Widow Kendall house, for example).   Existing slate will not be put back once regrading is done.  Preserving slate sidewalks is another very good reason (beyond saving trees) to ask the City to consider each stretch of sidewalk separately.

My hope is that the City will, instead — like many municipalities around the nation and world — consider all alternatives and make every reasonable effort to preserve every healthy tree.   We were told on Thursday April 1st that the requests for bids would go out in a week or two.   The City should halt the project before bids are requested, and ask the Schenectady Historic District Commission to study and make proposals about the preservation of trees (especially related to actions by the City).  I believe the Stockade Association should be on record urging the City to make every effort to preserve healthy mature trees. The Commission may initiate a study or make recommendations for new policy, laws or regulation, and it should do so, if not specifically requested by the City.

Here’s another shot taken near Front Street on Washington Avenue during the2009  Stockade-athon.  Imagine the scene without the trees: 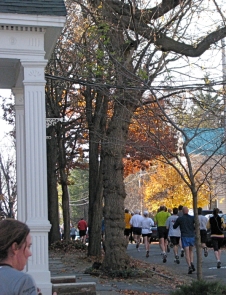 After saying it was impossible to keep any tree along the street due to safety and liability problems once the roots on both sides of the trees were removed for the repaving, the engineering department representative said — rather halfheartedly — that any owner who wants to try to keep his try should let him know, so he could “see what we can do.” 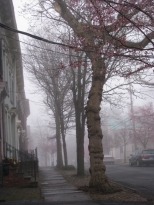 Is this box elder .. 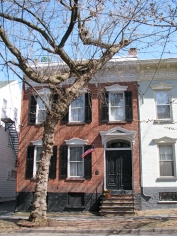 Instead of jumping at the chance to keep his tree, the owner of the above unique, glorious and healthy tree (seen in several shots in this posting) said he was glad to have it taken down because it was ugly.  [Box elders, formally named acer negundo, is also called a maple ash.] Other owners in that row also said they would not mind having the tree taken down in front of their houses — one because it put leaves on his roof and in his gutter, and another because its branches touched the house, and it was not a very grand tree.  Of course, Historic District homeowners can’t take a shutter off the front of their homes without getting permission.   Yet, the homeowners were willing to have a large mature, healthy tree removed forever for some rather underwhelming or frivolous reasons.  Their say is apparently final according to the head of the repaving project.  The fate of these trees should clearly not be up to a single property owner.  The interests of the entire block and the whole Stockade District (perhaps with input from the Historic District Commission) must be given great weight.

One option the City has is to not take up sidewalks that do not require repair or replacement for safety reasons; another is to do less drastic root removal at sites where the sidewalk can be leveled without major root removal.  Take a look at the sidewalk along this stretch of Washington Avenue and consider whether such options might be viable in order to save a healthy tree: 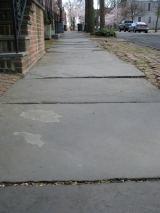 The City is certain to claim fiscal reasons for asking construction crews to merely plow up all the sidewalks and mow down all the trees.  Of course, that assumes it’s is cheaper to do the blunderbuss approach, taking up all the sidewalks, rather than leaving significant stretches of sidewalk alone because they do not need drastic repair or because a moderately-needed repair is simply not a good enough reason to take down a mature shade tree.   More to the point in an historic district: an added expense in order to preserve an important structure, place or streetscape is considered a small price to pay to maintain the character of the district.

If you would like to help preserve our Stockade trees, please contact the mayor and the City Council members, send letters to your newspapers, and tell your friends to do the same. Here are email addresses for the Council and the Mayor:

Your comments are welcome on either side of this issue, but no personal attacks will be allowed and civility is required. 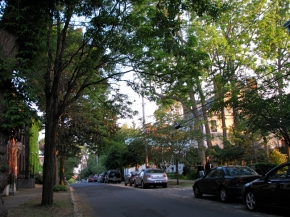 update (May 29, 2010): Washington Avenue looks pretty good at the end of May 2010, with leaves on all the trees. Check out the posting “around the block around sunset” at suns along the Mohawk.

– stay tuned for more commentary, news and photos at this website –

FOIL REQUEST: As noted above, I filed two Freedom of Information Law requests at City Hall on April 15, 2010, seeking the following records relevant to the repaving and repair of the street and sidewalk on Washington Avenue(April 15, 2010): Below you can find the wording of those requests with discussion of the City’s response.

– Any request for bids made in 2010 for the repaving and repair of the street and sidewalks of Washington Avenue.

– Decisions made, or minutes of any meetings, addressing the application of the State Environmental Quality Review law to the repaving or repair of streets or sidewalks on Washington Avenue, or within the Stockade Historic District;

– Rules, regulations, legislation, or policy statements regarding (a) the preservation or saving of trees affected by street or sidewalk repaving or repair actions; (b) the impact of actions taken by the City within or having an impact on an historic district.

– Any description, in words or as an image such as a map, sketch or photograph, of the scope of the project to repave and repair the street and sidewalks of Washington Ave, including which trees will or will not be removed, and any change in the width of the street or any sidewalks, utility strip or home median strip; in addition, any description or depiction of the project’s timeline or expected costs.

The City has 5 days to acknowledge receipt of the Request and 20 days to grant or deny the Request, or say why it needs more than 20 days.

FOIL RESULTS. The City’s reply to my FOIL request can be easily described:

Only two pages were provided in response to the FOIL request: two plats, dated 03/24/10, showing “existing street layout” and “proposed street layout” for the repaving and sidewalk repair of Washington Ave.  All other requests were denied in an April 30, 2010, letter from Corporation Counsel, for the stated reason that “No records exist which responds to request.”

That means there were no documents relating to the environmental impact of repaving on Washington Avenue or the Stockade District, nor concerning the applicability of the New York’s SEQRA regulation to any such repaving project.  That is not surprising.  What is surprising, or at least highly disappointing, is the fact that there were no records responding to the following request:

Rules, regulations, legislation, or policy statements regarding (a) the preservation or saving of trees affected by street or sidewalk repaving or repair actions; (b) the impact of actions taken by the City within or having an impact on an historic district.

If there are no such documents nor relevant legislation, regulations, or policy statements, it means that the City of Schenectady has no rules or guidelines concerning the preservation of trees that are affected by the actions of a City agency, or of private persons fulfilling a City contract — not even with regard to the impact on one of the City’s historic districts, where even minor changes in building façades or street scenes are usually banned when other reasonable alternatives exist.

3 thoughts on “please help save our Washington Ave. shade trees”