Rivers Casino at Mohawk Harbor posted its final Weekly Gambling Revenue Report for 2018 yesterday morning (Jan. 4, 2019), at the website of the NYS Gaming Commission. Here’s my summary in a nutshell:

. . Here are charts with those numbers: 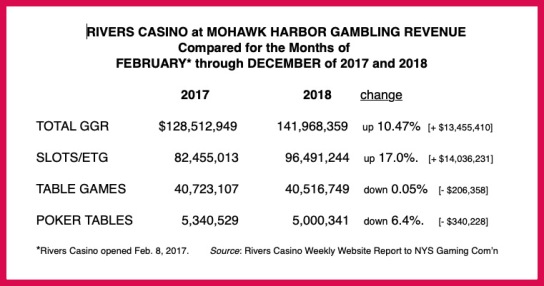 How will the “Casino Gang” spin the 2018 GGR numbers? I’m betting the owners of the Casino [Rush Street Gaming] and Mohawk Harbor [the Galesi Group], and casino-affiliated businesses, plus elected and appointed officials, who have risked their reputations on casino results, will be merely touting a “significant” increase in gaming revenue over the 2017 results, with corresponding uptick in tax revenue. If you’ve been reading revenue comparisons reported at this website throughout 2018, you already know we are not exactly impressed with the Gaming Revenue situation at Rivers Casino, especially if this is what “stabilization” of operations at Rivers Casino looks like.

A year ago this week, we analyzed the year-end numbers for Rivers Casino in a posting titled “Casino Projections vs. Casino Reality” (Jan. 7, 2018); the image at the head of this paragraph is a detail from a collage called The Rivers Casino Projection Game. It is difficult to feel any more optimistic a year later about the benefits to our community that will flow from Rivers Casino as compared with the risks our leaders took bringing it here. That is especially true when recalling that plans for Mohawk Harbor were well on their way before talk of a casino, and would have brought most of the benefits, more green-space, and maybe a downtown supermarket. Mohawk Harbor without a casino would have meant avoiding the increased risk of problem gambling and addiction, and DWI incidents; along with the dispiriting sight and sound of supine “snowman” leadership, and the disappointing failure to fulfill tax-relief promises, that have come with the Casino.

The downsides seem no less daunting, including the ethically-bankrupt decision to use casino revenue as the source of tax relief (as a wag has put it: Robbing Grandma to pay our property taxes); and the downsizing of Schenectady’s image from Lighting and Hauling the World to home of a mediocre regional casino. The benefits seem scarcely worth the risks taken, especially since Mohawk Harbor and the rebirth of our downtown were already bringing most of those benefits without the downsides.

After reviewing the August 2018 revenue figures, we mused over the predictable Catch-22 our civic “leaders” and Casino Cheerleaders have thrust upon our Community. [There is a slightly edited version at the foot of this posting.*] Efforts to increase gaming revenue, especially gambling dollars from slots, threaten our most vulnerable community members. And, general efforts by Discover Schenectady and local leaders to increase non-gambling dollars spent at Rivers Casino and Mohawk Harbor, will benefit their owners, but bring in lower levels of tax payments (since sales taxes and food/beverages and entertainment and retail are so much lower than gaming revenue taxes).

Rush Street Gaming has a history of over-predicting its gambling revenue, and there is apparently little risk when it does so. Rivers Casino’s gaming business does not need to come even close to its projections to be profitable. And, sadly, even lower than predicted gaming revenue will not be likely to reduce problem gambling, when so many of the gambling dollars are generated by “slotsification“.

Nonetheless, a Civic Booster might ask: Aren’t the final numbers a reason to be optimistic? Isn’t the 17% increase in GGR at yearend 2018 over yearend 2017 truly significant? A Casino Realist might answer: Not, I am afraid, when you realize that there were 5 extra weeks of operation in 2018 than 2017. If 2017 had been a full 52-week year, and monthly average GGR remained the same, we would have expected about $142 million in GGR for 2017. The 2018 result of $152 million, is only 7% higher than the full-year estimate of $142 million GGR.

Indeed, whether the added GGR in 2018 at Rivers Casino was 7%, or 10.5% or 17%, it is difficult to get excited about the increase when we recall all of the in-place features that should have brought many more people and, therefore, more gamblers to Mohawk Harbor. We were told last year to “wait until” many additional amenities were in place. The full-panoply of features at the Mohawk Harbor site that are now in place and should have drawn an ever larger increase in gambling dollars in 2018 include:

Meanwhile, can we expect the early enthusiasm for Rivers Casino gambling to continue in the primary local marketplace? Beyond human nature, which looks for novelty, we have reports of “riots” inside on two occasions, tales of unreported muggings, and increased auto break-ins in nearby neighborhoods, tarnishing its reputation.

Furthermore, Rivers Casino and its experts only predicted, a 10% increase over the 2018 GGR for 2021, which it considered to be a fully stabilized year. Our leaders keep saying “wait until the Casino operations stabilize,” but stabilization at a rather under-whelming plateau, far short of projections, is not cause for celebration.

As more information comes out about 2018 operations and results at Rivers Casino, we will attempt to cover them at this website. It would also be helpful if the media or local government started to look into the effects the Casino might be having on pre-existing businesses in the local entertainment, dining, and leisure marketplace. Also, how have Schenectady residents fared in obtaining and keeping jobs at Rivers Casino?

*/ After reviewing the August 2018 revenue figures, we mused over the Catch-22 our “leaders” and Casino Cheerleaders have thrust upon our Community. This is a slightly edited version:

We are, therefore, in the very Catch-22 situation that any thinking person (especially those not hoping to cash in on the coming of a casino to Schenectady), and any thoughtful politician or leader (especially those realistically looking after the interests of the entire community, weighing pros and cons, and benefits to risks) would have foreseen and avoided when the Casino-In-Schenectady process started in 2014.