follow-up: Two resolutions passed by the City of Schenectady City Council on June 12, 2017, represent a compromise solution that we hope will sacrifice, at most, less than 0.1 acre of parkland at Riverside Park. See the posting “what the parkland alienation resolutions mean” (June 12, 2017), at suns along the Mohawk.

Please Note (Monday, May 3, 2017): For a detailed summary of the May 2 informational meeting on the Project, see our post “strong, thoughtful opposition to pump station in the park” (May 3, 2017).

Click this link to see the 25-page Presentation to the Stockade Association Board of the proposed North Ferry Pump Station Project, given on March 1, 2017, by architect Frank Gilmore and CHA’s lead engineer Mike Miller. And, click this link for treatment of the Pump Station in the May 2017 Stockade Spy. 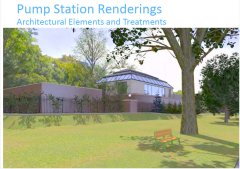 Thank you, John [Samatulski], for saying aloud and in print what has to be said, and saying it so well. [click here for John’s email to the Stockade Yahoo Group]

These points need to be made about the Stockade Association Board’s failure to report in a timely manner to the SA membership and the neighborhood on the character of the proposed Pump Station Project:

You can find photos of the endangered West Lawn of Riverside Park, and images of the Renderings, at “suns along the Mohawk”, at http://tinyurl.com/WLawn .

Thanks for taking the time to consider these points. Please plan to attend the public presentation by CHA of its Pump Station Project on May 2,  at 7 PM at St. George’s.

*/ Any Board or Association member who is asked to review a project in or impacting the Stockade neighborhood should have on the tip of his or her tongue or fingers reference to The Dept. of Environmental Conservation’s policy statement on Visual Impact Assessment [available at http://tinyurl.com/VisImpactDEC]. The DEC Visual Impact Policy Statement, among other things, says that a formal visual impact assessment is needed, with at least a line-of-site survey, whenever any component of a project can be seen from an historic district, such as the Stockade, with adequate mitigation measures taken to prevent any significant visual impact on or from the District.  [The Visual Impact Policy should also be posted at the Stockade Association’s very underutilized website.]

Even The Galesi Group and Rush Street Gaming stated, in their Application to the Casino Location Board for the Schenectady casino license, that a Visual Resource Assessment (VRA) in accordance with the NYSDEC Visual Assessment Policy was needed to identify the potential impact of the proposed development scenario on the visual character of surrounding neighborhoods. [Because they ignored the 80’ pylon tower in their own VRA and stressed the low-rise nature of the casino complex, they said it would have no impact on the Stockade.]

What’s So Special About Riverside Park?

Riverside Park is only 6 acres of land, stretched along 1/3rd of a mile of riverbank. In thinking about the impact on the Park, I hope decision-makers will keep in mind three sources of praise and caution from outside the Stockade:

. . click on the above collage for a larger version . . 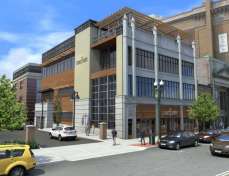 update (Jan. 31, 2012): Today’s the fifth day of the physical demolition by Jackson Builders of the Odd Fellows Hall at 440 State St.   The terra cotta façade is gone and the entire building will be removed over the next few weeks.   This slideshow includes photos taken about 7:30 on this gloomy-gray morning at the site plus shots taken on November 20, 2011, when Tom Hodgkins and his children held an Architecture Appreciation Party for the building.  That story is below in the original posting. At the bottom of this posting you will find a Gallery with each of the photos; clicking on a Gallery image will bring you to a larger version; scroll over a Gallery image for a description. 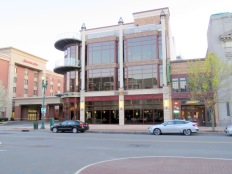 Tom Hodgkins and his three kids had an Architectural Appreciation Party in front of 440 State Street the past two mornings.  As Tom explained in a message to our Stockade neighborhood email list Saturday night:

“We had fun today at our architectural appreciation party.  The kids played music, carted around the wagon, ate candy and fruit, while I discussed the fate of the building with pedestrians.”

. . click on a photo for a larger version; scroll over it for a description . .

Tom told the Gazette in the Sunday paper today: “We’re just appreciating this building and the values it embodies before it’s gone.  It’s already been done.  The city’s been bought out.  It’s done. We’re just here to appreciate it before it’s gone.” See “Man stands alone in protest of plan to raze historic Schenectady hall” (Sunday Gazette, by Bethany Bump, November 20, 2011, at B5; online by subscription) More of the story can be found in Thursday’s Gazette, in “Planners approve demolition of historic Odd Fellows hall” (Daily Gazette, by Justin Mason, November 17, 2011, at B1; online), which explained:

“Wreckers await the former International Order of Odd Fellows hall in the very near future.

“Members of the city Planning Commission narrowly approved drastic changes to a plan they approved in July, allowing building owner Tony Civitella to demolish the entire structure at 440 State St. . . .

“The approval will allow Civitella, the president and founder of Transfinder, to immediately move forward on demolishing the entire building. His original plans called for the leveling of the rear of the structure, but to retain the ornate terra-cotta facade and about 20 feet of the building’s front.”

The Planning Board majority, with virtually no time for the public to weigh in, rushed to impose the death penalty on the Temple after Civitella came up with an engineering report saying the façade cannot be saved, and pressed for immediate action on his new plan due to imminent winter weather.  We’re supposed to believe that no one at Metroplex, no one in Civitella’s organization, and none of his architects or engineers thought to ask the obvious question last Spring, when Metroplex promised grants — including a $60,000 façade grant — and the project was announced with great fanfare and applause for Mr. Civitella and Metroplex: “Can the façade be saved and can we afford to do it?” In July 2011, the purchase was finalized.

For me, it’s much too much like the sorry Gillette House bagel shop story from January, 2011, leaving the same bad taste in my mouth.   Shortly after much hoopla and back-slapping over a plan to “save” an important historical building, the shrewd businessman-buyer discovers his original plan is simply no longer viable, and civil servants with the obligation to look hard at the situation and to preserve and protect our architectural heritage give in without demanding lots of facts and taking time for appropriate consideration. It is outlandish that a decision could be made when Civitella only submitted his drastically altered plans two days before the Planning Commission hearing.

There should never have been such a rush. The Gazette tells “In mid-August, Transfinder paid the state Office of Parks, Recreation and Historic Preservation $150,000 to lift a covenant placed on the building that would prevent him from demolishing it.” Transfinder knew it wanted to demolish the building soon enough to negotiate the covenant buy-out in August. And, yet, this big rush to beat winter was delayed until filing for the drastic change and demolition permission in mid-November. It seems far too convenient that it happened so far into winter that the Commission could hide behind weather as a reason for its hasty action.

You can bet there will be a great rush to knock that building down, especially the troublesome façade.  A lawsuit will be complicated and expensive, and have only a slight chance of finding a sympathetic judge who could act in time to save this fine old building. [Followup: As reported by the Gazette, demolition started the last week of January, 2012.]

Thanks go to Planning Commission member Matthew Cuevas for trying to slow down the process by tabling the measure.  And, thanks to Schenectady Heritage Foundation Chairwoman Gloria Kishton, for frantically piecing together public opposition over such a short timeframe.  Especially, thank you, Tom Hodgkins and kids, for reminding us what we’re losing.  As Tom told our email group yesterday:

“Spending time in that location really gives one some perspective on how few historic buildings remain downtown, and the loss of a building built by the people for the people in the name of love is a crime.  It’s not the loss of a bank, or some industrialist’s residence, it is the loss of a temple. “

The Hodgkins kids always make me grin (often due to their photogenic charms).  But, seeing them at this Party-Protest had me smiling even more, hoping some of their dad’s zeal will rub off, so they’ll never simply take for granted the old buildings they see every day around their Stockade home.  At the rate they’re coming down despite laws meant to protect them, there soon won’t be any historic buildings left to preserve in downtown Schenectady.  The only, slight consolation will be that Tom and Gloria and I, and other lovers of our architectural heritage won’t have to have our Thanksgiving meal ruined with a holiday case of Demolition Agita.  This year, however, I’m heading to my medicine cabinet for a second helping of architectural-size antacid.