The city has seen its share of replacing sidewalks on Ardsley Road jump from $63,000 to $159,192, again calling into question the shifting costs of the city’s new sidewalk replacement program.

The city has seen its share of replacing sidewalks on Ardsley Road jump from $63,000 to $159,192, again calling into question the shifting costs of the city’s new sidewalk replacement program.

The original bid to replace sidewalks on Ardsley Road came in at $179,435. But final costs were $238,194, which resulted in homeowners getting hit with bills twice as high as they were expecting.

The rapid and unexplained rise in City Share (about $96,000) is particularly puzzling, because we have been told by Mayor Gary McCarthy and City Engineer Chris Wallin that the huge bills sent out to Ardsley Road residents a month ago were caused by unexpected costs for Top Soil, Seeds, and Tree Removal. But, the increase in Soil & Seed costs (which were almost 12 times as much as in the approved and supposedly reviewed Contractor’s Bid) were “only” an extra $42,538. Moreover, the Tree Removal costs, which were always going to be paid for by the City, were merely $9000 more than in the Contractor’s Bid. That leaves over $40,000 in City Share costs unexplained by anyone and by any figures shown in the original Contractor’s Bid or the new Project Cost sheet.

We are left with some big questions:

Click on the thumbnail to the right for David Giacalone’s Comments submitted to City Council for the Public Hearing on Monday, January 27, 2020, regarding the Ardsley Road Sidewalk plan and the City’s proposal to reduce the cost to the Homeowner-Residents to $55.44 per linear foot of sidewalk (an amount that would still be 25% higher than the estimates for the program given in January 2020 by Councilman John Polimeni and City Engineer Chris Walling). The Comments contain a breakdown of relevant costs, showing the original Contractor’s Bid, the revamped Cost Sheet giving “actual” Project Costs, and the escalation in the City’s subsidy to the Ardsley Rd. residents in order to reach the $55.44 figure. The Comments include discussion of many of the questions and issues raised by the puzzling numbers in the first and second Cost Sheets and the City’s “explanations”.

At the Council Meeting on Monday, Council members Leesa Perazzo and Marion Porterfield, who along with Vince Riggi, voted against the enabling Resolution for the Sidewalk Plan, both emphasized that improvement is crucial, and revamping the entire Plan should be considered. Perazzo called the increase in the City Share “breathtaking.” Polimeni’s co-conspirators in adopting the Plan and approving both the Ardsley Rd. Bid and New Cost Sheet, Ms. Zalewski-Wildzunas and Ed Kosiur, had nothing to say about the Ardsley Rd. frustrations or the ballooned subsidy by the City.

Despite all the problems and unanswered questions, John Polimeni told the Gazette:

“We’re making attempts to correct and make it better in the future,” he said after the meeting. “As the architect of the program, I’m going to do what I can to make sure it succeeds.”

However, with so many uncertainties as to costs and procedures, and so few blocks likely to volunteer for this Sidewalk Assessment District plan, here is, to my mind the:

MOST IMPORTANT QUESTION: Are those large and unexplained costs expected to be encountered by every block petitioning to be in the Sidewalk Assessment District? If so, does it make sense to continue the Program, which was never destined to be used by more than a tiny percentage of City blocks, rather than pausing or junking it?  Wouldn’t it be more responsible to do the homework necessary to construct a system in Schenectady that is fair to property-owners and taxpayers, and will actually achieve what we all want, a sidewalk network that is in good repair across the City? [click this link to see a description of how Rochester and Syracuse approach sidewalk repair.]

See the Letter to the Editor in the January 29, 2020 Gazette by DeCamp Avenue petitioners Laurie and David Bacheldor, who are rightfully upset and asking the right questions.

Here are side-by-side depictions of the Cost Sheets used by the City for Ardsley Road.

THIS TALE IS TO BE CONTINUED.

p.s. I continue to believe that the Sidewalk plan was pushed and rushed by Mr. Polimeni and the Mayor’s office for the political purpose of having a block completed before the November 2019 election. 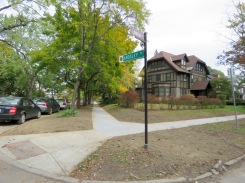 The City of Schenectady government slipped and fell hard on its collective butt in orchestrating completion of the first block of sidewalks under its Sidewalk Assessment District Plan. Of course, it is the Petitioners on Ardsley Rd., and eventually Schenectady taxpayers, who will feel the pain. The new Ardsley Rd. sidewalks on the block from Union St. to Rugby Rd. are apparently fine, but the failure to inform the Homeowners of the surprisingly high cost may doom the entire Sidewalk Program, which relies on property owners convincing their neighbors to participate with predictions of big savings.

The Sidewalk Plan was controversial for being adopted by City Council without needed details and explanation (see Gazette article, March 13, 2019; click to see the disappointing Explanation of the Plan provided to the Council and the public by sponsor John Polimeni). Nevertheless, there was nothing inevitable about the “slip ‘n’ fall” calamity that happened on the way to replacing and billing for the new sidewalks on Ardsley Road. See our discussion here for full details; and “City hits speed bump with sidewalk program” (Daily Gazette, by Pete DeMola, Jan. 3, 2020); “Foss: City’s new sidewalk program a disappointment” (Sunday Gazette, by Sara Foss, Jan. 5, 2020).

Even after the Sidewalk Plan was prematurely brought up for a vote and adopted by the City Counsel in a 4-3 vote in March 2019 (with Vince Riggi, Leesa Perazzo, and Marion Porterfield voting No ), there were many points at which the outcome of the first completed block — an approved Contractor Bid with Ardsley Rd. Homeowner Costs 84% higher than Plan sponsor John Polimeni’s estimates, and initial Annual Bills calculated at an even higher rate, with no prior warning to Homeowners — could and should have been avoided.

On the other hand, the excessive cost to the Ardsley Rd. homeowners, and failure to keep them informed, was not an accident, either. It was due to deliberate choices made by the two City officials most actively engaged in the Sidewalk District Assessment Plan: Council member John Polimeni and City Engineer Chris Wallin, along with secondary negligent oversight by the remaining Council members.

Part of the problem might have been that Prof. Polimeni believed, as he told a Gazette reporter last March, that “the process would be ‘relatively easy’ despite the numerous city agencies involved”, and “It’s not your typical runaround sometimes you get.” Nonetheless, relatively easy or not:

. . Ardsley Rd. Homeowners generally like the new sidewalks, but they cannot forget how poorly they were treated during this “pilot” block project . .

Why would City Hall treat the Homeowners on the Ardsley Road Petition so shabbily? It is difficult to believe that John Polimeni and Chris Wallin are too ignorant of fair play and good government processes to accidentally keep the Residents and the Council informed.  If nothing else, Mr. Polimeni was being asked for the bid/cost information before and after the sidewalks were completed. Wallin said he wanted to beat the winter weather, but that assumes there was some great disadvantage to waiting until Spring. The only reason that makes sense to me is that Polimeni (and probably his Party leaders) wanted the block to be a milestone to point to in the Election.

END_OF_DOCUMENT_TOKEN_TO_BE_REPLACED

. . click this link for the discussion below of the Polimeni Sidewalk Plan.

update (Nov. 6, 2019): Last night’s election results [click on image to the left from Times Union] for Schenectady City Council were quite disappointing to those of us who had hoped to achieve a more deliberative and better-informed City Council, to make its dynamics and processes wiser and more small-d democratic. The entire 4-person Democratic Party slate was elected, with a surprising loss by independent Vince Riggi, our “voice of reason (in the wilderness)”. [see Gazette article; TU Election Results] I hope newcomer Carmel Patrick will resist the “mushroom management” style of Mayor Gary McCarthy, and demand to be better informed about facts, goals, alternatives, legal requirements, etc., before voting on matters before the Council.

Congratulations to Leesa Perazzo on her impressive re-election result. Leesa will need to be more vigilant and persevering than ever.

. . Gazette‘s Halloween Trick: At the bottom of this post I respond to the Gazette editorial that endorsed John Polimeni for re-election.

When it became clear in late June that Mayor Gary McCarthy would have no opponent on the November 5 ballot, I wrote to his primary opponent Thearse McCalmon and at my Facebook Page that:

THE BEST THING we can do right now is to continue to work toward this November election, to DENY MAYOR GARY McCARTHY HIS NEARLY CONSTANT FOUR-VOTE MAJORITY of the same four Democratic Council members. If he knows that he could lose any particular resolution he presents, Mayor McCarthy will have to:

The next best thing to a new mayor is a mayor who can no longer count on getting all his desires rubber-stamped.

Looking at the people who will be on the November 2019 City Council Ballot, we need to think about and support the people most likely to be independent thinkers, who will insist that the Council is the City’s legislative and policy leader, not the Mayor. And, who see themselves as the partners of Schenectady’s residents and neighborhoods, not partners of the Mayor’s favored developers and commercial interests. [update (Nov. 3, 2019): The Sunday Gazette has an article by Pete DeMola that captures the dynamics of the City Council race, “In race for Schenectady City Council, Democratic unity belies more complicated tensions: Seven candidates campaign for four seats”. It notes, for instance, that if Vince Riggi wins one of the four contested seats the four Democrats on the ballot are competing with each other for the three remaining seats.]

. . the Mayor and his Gang of Four

FIRE POLIMENI. The 4-member Council “Rump” Majority is made up of Council President Ed Kosiur, John Polimeni, John Mootooveren, and Karen Senecal Zalewski-Wildzunas. Only Ed Kosiur and John Polimeni are on the ballot from this Council Clique. Vince Riggi and Leesa Perazzo are also on the ballot, seeking re-election. (See Gazette article)

Because of the many legislative missteps that we have seen initiated and pushed by John Polimeni, in addition to his virtually always acting as either a silent rubber-stamp or cheerleader for Mayor McCarthy, I believe we should work to ensure that Prof. Polimeni does not win re-election to the Schenectady City Council.

SILENT WITNESS/Co-Conspirator. John Polimeni has not spoken out to [1] Ask for Privacy Safeguards for the City’s Smart City information gathering, and now says he wants to use the data to generate revenue, which means No Privacy, as the City sells information gathered about its residents and visitors to marketers. (see our post “Council, Do Your Smart City Homework.” [2] Demand that the Mayor return our replica Statue of Liberty to Liberty/Gateway Plaza, as was promised in the Final Plan approved by City Council and the Mayor in 2013. (In fact, he signed an error-filled petition to send Lady Liberty to Steinmetz Park; click here for the full Lady Liberty Story.) Nor, [3] Complain when Rivers Casino acknowledged that its lobbyists were seeking to reduce the 45% gaming tax on slots revenue to below 40%, meaning at least a 12% reduction in slots gaming revenue. Any reduction, of course, would mean less money coming into the City’s coffers.