We’ve been quiet here at Snowmen At The Gates about sports betting since our post in May 2018, when the U.S. Supreme Court opened the way for all states to authorize sports betting. A couple weeks ago, Rivers Casino at Mohawk Harbor became the first facility in the State of New York to offer legalized sports betting at its Rivers Sportsbook lounge. [see Times Union coverage, and the Gazette article, July 16, 2019]

Having succeeded in keeping all but full-fledged casinos out of the sports betting game in Upstate New York for now, Rivers Casino is secure in the knowledge that its nearest competitors will be Resorts World International Catskills (123 miles away); del Lago Casino (156 miles away); and Tribal casino Turning Stone, in Verona, which is 97 miles away (see: “Turning Stone sports betting opens” (Syracuse.com, August 1, 2019, by Ben Coin).

Being slow learners, or good actors, our local pols have been brimming with optimism about all the new business and revenue, and tourism, sports betting will bring for Schenectady (City and County) and the State. [photo detail to the left by Paul Buckowski, Albany Times Union] Naturally, beyond the usual hyperbole and uncertainty of any wagering projection, no one has mentioned what will happen if existing Rivers customers substitute Sports Wagering (taxed at 10%) for their Slots betting (taxed at 45%), the only form of casino betting at Rivers that has been growing since its first year of operation; or, if they simply spend time at the Sports Lounge that would have been spent at the Tables.

Rivers Casino has apparently spent a million dollars preparing its 5000 square foot Sports Wagering Lounge. We now have figures for the first two weeks of Sports Wagering at Rivers Casino, as shown in this screen shot compilation, from the Rivers Casino weekly reports to the NYS Gaming Commission [click on the image for a larger version]:

I have no idea whether the total of Sports Wagering for the first two weeks, $260,334, should be considered large or small; I do not think Rivers/Rush Street gave any public projections. But I will note that the two weeks included two very successful Saturday evening Harbor Jam concerts at Rivers Casino and the Mohawk Harbor Marina, creating the potential for thousands of the curious to check out the Sports Wagering Lounge.

Just looking at the numbers, I do see that:

Of course, two weeks may not tell us much. But, Rivers Casino certainly got a lot of publicity for the opening of Sports Wagering in New York State. Fans of legal sports betting might have been expected to rush over to Mohawk Harbor. So far, totals at Rivers Casino suggest less overall revenue and therefore lower tax receipts than prior to the New Age of Sports Betting. If your tummy is easily upset, I’d suggest some dramamine to deal with the Spin Tsunami that may be coming. On the other hand, when it comes to less-than-rosy news about Rivers Casino, we mostly get deafening Silence from Rush Street Gaming, Rush Street Schenectady, and their handmaidens at City Hall, Metroplex, and the County and State Legislatures. Their unwitting public relations departments at our local media tend to run out of words (and follow-up questions), too, when casino news is not good.

update (Aug. 9, 2019): According to the Rivers Casino revenue report for the week ending 08/04/19, Sports Wagering GGR for the 3rd week at Rivers Sportsbook was $25,386. That’s two-thirds less than its dismal 2nd Week, and a mere 15% of the Week 1 sports wagering take. Total GGR at Rivers Schenectady was up 13% last week over the prior week, with Table Game revenue up 43% and Slots revenue up about 7%.

Our elected leaders at Schenectady City Hall, who love to call the Casino their Partner, were all too thrilled to support Sports Betting on the Mohawk. Not one word was said by the Democratic majority or the Mayor’s Office about the not insignificant chance that overall tax receipts could decline, even if Rivers Casino got more profitable. I, for one, have no interest in throwing the ones seeking re-election at this time a life preserver. The least they could do is demand that the projection numbers be crunched to see how the net receipts are likely to work out for the City and County. And, start thinking of the people of Schenectady as their partners, not the Mohawk Harbor Gang.

follow-up FYI (August 4, 2019): Capital Region media never mentioned it, but in March 2019, Rush Street Gaming sold 61% of its ownership of the Des Plaines (Ill.) Rivers Casino, the largest casino in Illinois, to Churchill Downs. That surely got Rush Street a powerful influx of cash, despite all its crybaby antics at the NYS Legislature seeking tax breaks. The folk at Rivers Casino Des Plaines have announced a very large plan to get into sports betting big time. See “Rivers Casino owner is betting big with plans to expand Des Plaines casino, add sports wagering and go after a new casino license” (Chicago Tribune, August 2, 2019, by Robert Channick)

Slots play continues to be the only form of casino gambling that is increasing at Schenectady’s Rivers Casino since its first year of operation. Table game and Poker Table play are down. According to the Rivers Casino Monthly Reports submitted to the NYS Gaming Commission,

As with the 2nd Full Year of Rivers Casino revenue, the increase in Slots gambling from January through April 2019 was greater than the total increase in GGR at the Casino at Mohawk Harbor. Members of the community who worry about Problem Gambling and its effects on the gambler, and his or her family, friends, job, and on the community, are concerned, because Slots is the most addictive form of casino gambling.
.

Is this “slotsification on the Mohawk”, simultaneous with a reduction at the same location of table game and poker play, evidence of growing slots addiction in the mostly-local customer base of Rivers Casino? Perhaps the survey that the NYS Office of Alcoholism and Substance Abuse Services plans to start in January 2020, may give some answers.  See “Does New York have a gambling problem? Survey hopes to find out” (The Buffalo News, by Tom Precious, May 16, 2019) According to the Buffalo News:
.

Bids for the gambling survey are due back to the agency on June 5. The group or firm selected will conduct surveys, in English and Spanish, of 5,000 adults broken down into specific regions of the state. Interviews will be conducted over five months beginning in January and a draft report on the findings is due in August 2020.

.
As we have argued here often, proximity to casinos increases the prevalence of problem gambling, and we need to focus far more resources at preventing problem gambling, not merely treating it once its damage is apparent. See our post, “Slots and problem gambling prevention” (March 27, 2019) for discussion and suggestions.
.

Rush Street Gaming released its third design proposal for the Rivers Casino at Mohawk Harbor this morning and it is, frankly, a bore. (Image at the left is a view of the riverside patio and the Casino hotel). The Gazette and the Times Union’s Business Buzz Blog only have two images to show us. The TU post pairs the peek at the 3rd version with similar images from the 2nd version. (click for our post on the 2nd Design) There is apparently no broad rendition of the entire casino facility or compound available, which seems to be one more slight for the public. Here is the front entrance to the Casino as released today: 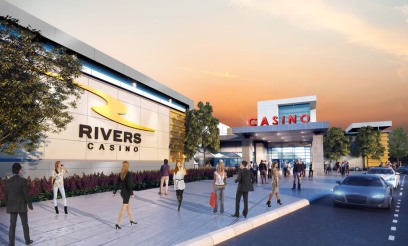 And, here’s an Open Letter to the Gasino Gang from a disgruntled resident of Schenectady and its Stockade District [me]:

“Schenectady” does not mean “doormat” or “dustpan” in the Mohawk Language. Treat us with a lot more respect, please.

s/ Man on the Street and on the Web

Haley Vicarro at the Gazette referred to the above design as “the third and presumable final draft of the Rivers Casino.” (Schenectady Daily Gazette, “New look for Schenectady casino revealed“, July 9, 2015)  Rush Street has consistently believed and acted as if the public’s input is irrelevant; sadly, so has City Hall. I hope there will be another groundswell of opinion, keeping in mind that:

More commentary is surely to follow. Please leave a (polite) comment with your opinion or suggestion.  update: Michael DeMasi at Albany Biz Journal uses his headline to tell the story; see “New Schenectady casino design: how “brick” became a four-letter-word” (July 9, 2015). And, thanks once again to All Over Albany for providing high-resolution versions of the new renderings, plus encoring the earlier versions.

The Casino Pylon: Wrong Size/Wrong Place. Please don’t forget to check out our campaign to topple (before it gets built) the 80′ x 38′ eyesore and safety hazard Rush Street wants to erect, looming over Erie Blvd. from the corner of Front & Nott Streets. Links to relevant posting can be found at the top of “pylon envy?“.

follow-up (Thursday eve., July 9,  6:30): Could Rush Street have done any less work re-designing this facility (or spent less time and money)? Actually, they were honest, they just “tweaked” it.

– – the fake second story wall and support for the sign were removed from the 2nd design and colors were changed.

– – The tweaking in the rear patio was even less significant.

more follow-up (July 10, 2015): Demographics: Commentors at various sites and others chatting about the new renditions have noted that all of the Casino customers are thin, young, hip, white. How does Rush Street plan to make a profit without the Granny Buses rolling in and poor folk spending rent and food money?  Carl Strock (we miss him here in Schenectady!), after pointing out his opposition to casinos as an economic development tool, opines at his TU Blog, “Fantasy customers for Sch’dy casino” (July 10, 2015):

Look at them. Look how trim they are. Look how well dressed, the men in dark suits, the women in skirts and heels. All of them looking like they just stepped out of a Fifth Avenue shop window. I would say to the project developers, if you can guarantee us a crowd like this, I don’t care how you design your casino.